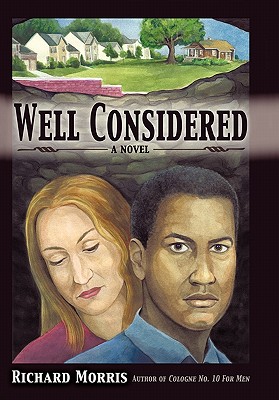 Read a Description of Well Considered

Some critics have often said white authors cannot capture the soul and passion of African American characters, but that is not the case with Richard Morris's aptly titled novel of race, hate, eugenics, and violence. Morris (Cologne No. 10 For Men) takes the tortured memory of a lynching of a Black man, Thomas Phillips, killed by a white mob in 1907 in Maryland and places it front and center in the mind of a contemporary man, Ron Watkins, his great-grandson. After learning the sordid details of the race crime, Ron seeks to unravel the facts of the murder of his elder.

His family, relocated from Oakland, California to the D.C. area, knows the vicious, subterranean venom of prejudice running just below the veneer of civility. Mr. Morris, a white man, has been looking and listening to all of the nuances of modern life, especially the joys and disappointments of Black culture and history. Through Ron, he examines the fear, insecurity, and potency of the American Black man, which some of our authors dismiss as just cheap machismo, gangsta posturing, and emotional shallowness. But Morris also creates the customary white bigot, Jimmy Clay, a son of the Confederacy and a Neo-Nazi with predictable gusto and demonic Gestapo rage. Peerless narrative point and counterpoint.

Mr. Jimmy Clay, sometimes speaking like hate rabble-rousers Rush Limbaugh and Glenn Beck, addresses the white fears of the post-Obama era in this fictional Eastern state: "Goddamned uppity niggers, coming in here acting like they own the country, wearing their white shirts and ties, and dressing up in suits, and driving their big black SUVs…Buying them big, fancy houses, moving in their little black monkeys, coming into the stores and bars and restaurants and movies. They're the problem. They don't know how to act. Don't know what it's like. They don't know their place."

Yes, Ron explores some of the bitter, disgusting segments of the Black history, but the lynchings completely underscore the vitality and strength of our ancestors. The writer looks favorably on the spice and spunk of our families, our husbands and wives, as they make their way bravely into the white world. When he probes the race killing deeper, he finds that his current situation mirrors the one endured by his great-grandfather decades earlier. In fact, Jimmy Clay, with his horny kinfolk Annie, is living in the house where Ron's elder used to reside. Ron has a yen for the suggestive Annie and changes his running routine to trot past her home. Jimmy and his boys spy on the Black man, eventually assault and toss him in a deserted well. The book asks some important questions: Is it possible to right a historic wrong? Is prejudice a part of human nature? And what is the remedy for hate?

With on-target commentary or race, sex, crime, family, social and gender issues, and mob violence, Well Considered is a profoundly memorable and affecting novel of an African American man trying to come to grips with the hate-filled past and the poisonous divisive present.