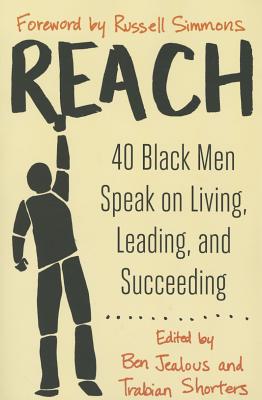 by Ben Jealous, and Trabian Shorters

Read a Description of Reach: 40 Black Men Speak On Living, Leading, And Succeeding

“I’m aware that, for black men today, racism is still an obstacle that causes tremendous anger and suffering… Whether it’s the kind of racially charged violence that led to the deaths of Trayvon Martin, Mike Brown, Jordan Davis, and countless other black, unarmed young men; or the predatory mortgages that invaded our neighborhoods; or the continuation of America’s obsession with warehousing millions of us in prisons and jails across the countryŚour people have been hit hard…

No matter how great the challenge is, you must breathe deep and keep pushing through. That is what the great men in this book have done during the course of their lifetimes.”  —Excerpted from the Foreword by Russell Simmons (pages xvi-xvii)

Many successful African-Americans seem to forget where they came from after they enjoy a measure of success and make it out of the ghetto. However, there are also those who remember their roots and maintain a lifelong connection to the black community.

These role models serve a critical function since, as editor Ben Jealous puts it in the Introduction to the inspirational book Reach, “We cannot imitate that which we have never seen, heard, or read about.” Jealous, the former President of the NAACP, asked 40 black males, some famous, some lesser-known, but each an everyday hero, to share his personal story of triumph in the face of adversity.

For example, singer/philanthropist John Legend reflects upon growing up in his hometown of Springfield, Ohio, where he and his siblings were homeschooled by their mom because his folks couldn’t afford the tuition for a Christian academy. He goes on to describe how he was profoundly affected by the death of his maternal grandmother when he was 10, and how he was further traumatized by his parents’ divorce just a year later, especially since his father took full custody of all the kids.

Nevertheless, John managed to make it to the heights of the music industry, and now generously gives back out of a sense of gratitude. He concedes that, “There was nothing more important to the outcome of my life than the early support I had from family and mentors outside of my home, the access to a piano to practice on, and forums like the church and the community choir in which to hone my craft.”

An enlightening collection of uplifting narratives by ordinary brothers of extraordinary achievement.