Book Review: Growing Up In The Nation’s Capital: We Made It, But It Took An Entire Village 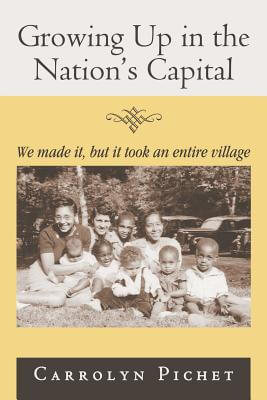 Read a Description of Growing Up In The Nation’s Capital: We Made It, But It Took An Entire Village

“I am a native Washingtonian, but I did not ‘live’ where most people want to go when they ‘visit’ the nation’s capital. I’m hoping that in ‘my story’ I can take you far beyond the ordinary tourist junkets and historic exhibits… My Washington was segregated along very specific lines and we blacks had our own way of life, our associations, communities and our own systems of protection. We did not have to compete with the white population for anything. Everything we needed (I didn’t say everything we wanted) in our daily lives was available.”

So begins Growing Up in the Nation’s Capital by Carrolyn Pichet, her memoir, but also a love letter to a time that may never be again. “Our small community… was a loving group of people who all knew each other and were more or less linked by a common bond. They were friends, relatives and neighbors who needed each other… We expected and received honesty, integrity and real human kindness… Even the homeless or less fortunate people who needed something to eat would knock on the door and ask for work… Often they could be seen sitting at the table eating a meal prepared for them as payment for a few hours of their skilled labor.”

To care for his four children, Pichet’s father worked two jobs for most of his life, while her mother stayed at home to care for the children, but took in washing and ironing clothes from white people. She later on became a “charwoman” to help make ends meet. Although far from rich, her childhood never felt poor and her memories are full of childhood “adventures” in the blocks that made up her neighborhood in and around Washington.

“My goal and the purpose of this book are to share my childhood with you, to let you feel the pulse of that environment and to let you experience the good and the bad of growing up in survival mode. I also want to show you that even the meekest and poorest people on earth can come through rough times and thorny patches and can actually bloom into a garden of beautiful flowers. The ultimate goal of the families and friends living in the 40’s and 50’s was essentially to survive and thanks to our loving village community, we did just that.”

Growing Up In The Nation’s Capital feels at times like we are flipping through Pichet’s family album and in a sense we are. She illustrates her history with family photos, some dating back generations, and with her poetry. We get the sense that she is wildly proud of her family and her heritage, and she is. I also get the feeling that she is proud of herself and the life she has managed to live, and she should be. She’s created a rich and varied life; one that she knows is indebted to those who came before her.

Her story will remind us of a time in neighborhoods when doors were left unlocked, and neighbors were extended family picking up the slack for each other wherever it was needed. That reason alone makes Pichet’s book a good, nostalgic read even if her past reads nothing like ours. We will connect to the sense of pride and purpose she grew up with in her family and her community, and how it illustrates the African proverb that it takes a village to raise a child. “Back then, if a neighbor lent a cup of sugar to my mother, she paid back the loan with a cup of flour, a stick of butter or a slice of homemade cake or pie. Since our neighbors were extended family, the doors were never locked. There was no shame in bartering or exchanging amongst us. We were all struggling to make ends meet, and every one of us was willing and eager to render some service.

Read AuthorHouse’s description of Growing Up In The Nation’s Capital: We Made It, But It Took An Entire Village.