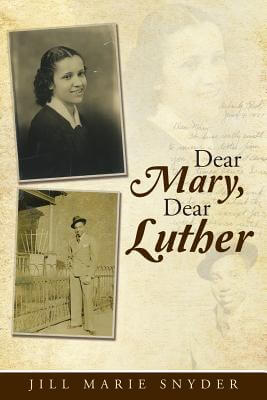 Dear Mary, Dear Luther: A Courtship in Letters is an epistolary love story of a 1930s courtship between Mary Brooks and Luther Snyder, the author’s parents. Their letters, which span from 1937 to 1940 tell not only their love story but they are also an insightful look at American and African American history.

Mary and Luther met in 1935 at a wedding in Wilkes-Barre, Pennsylvania. “After that first meeting, my father would frequently visit his aunt for a few minutes, then wander over to my mother’s front porch to spend hours chatting with her and her sister Sara. At first, they weren’t sure which sister was the attraction, but over time it became clear it was Mary. In 1937, my father left Wilkes-Barre to work for the summer in Asbury Park, a resort town on the New Jersey shore. Mary and Luther began writing letters to each other, and their correspondence lasted for three and one-half years until they were married January of 1941. During this period they saw each other only a few weeks a year. Each saved their letters, leaving a nearly complete set of correspondence chronicling their romance.”

After Mary’s death in 2007 Snyder began to transcribe the letters to fulfill her mother’s wish of seeing them published. For Snyder the letters not only “reveal the emotional track” of her parents’ relationship as it progresses from attraction to love, they also fight the media stereotypes that “often portray African American males as brutes, lacking feelings and deep emotions. Luther’s romantic expressions of romantic love will be a revelation for many.”

In Dear Mary, Dear Luther Snyder tells the parallel stories of her family history, and American history. Snyder’s tone is conversational, and her writing is straightforward and accessible. Many of the letters are quite short and episodic, as they relate what’s going on in Mary and Luther’s lives. Mary’s letters show her wit and sass, and some are quite funny. “Well there was another wedding day. Certainly are having an epidemic of marriages. The love bug is just killing himself in this vicinity… Well more power to them.” Luther plays against the stereotypes of how African American men were thought to act. His letters are earnest, unconsciously lyrical and laced with an underpinning of yearning and earnestness. “I hear the picnic is on the 27th I’m sure you will attend it. I guess I’ll have to miss it again to my regret—there ain’t no justice. The thing I really was hoping, was a visit from your or my mother so I could take you to the fair. I haven’t attended it yet thinking that you would come down. You know I just love being with you.” Some of Luther’s letters have poems, which he called “simple verses” that revealed far more of his feelings for Mary than his letters could.

“Deep through the night
And during the sultry day
Would be a delight
To be near her and not away.”

The chapters on American and African American history are enlightening and the black and white photos—many date back to the 1940s and earlier—give an intimate glimpse into the lives of Snyder’s extended family. The letters themselves give an authentic look into black family life at that time. An interesting juxtaposition to Luther and Mary’s relationship is Mary’s parents' relationship. Gus was black and Stella white. Mary recalled her family being terrorized. “Men in white robes burned crosses on our lawn because my father was married to a white woman… My mother always believed that it was her own brothers who were the ringleaders.”

Dear Mary, Dear Luther is not only the saga of an African American family finding their way and establishing themselves but also of a country finding its way and establishing itself during the post slavery years. It was a time that was both demoralizing yet filled with hope and pride. Snyder recounts the resolve it took for any family to survive, and for African Americans at that time, it was doubly hard. We get the sense that Snyder is immensely proud of her parents and what it took for them to not only survive, but also to thrive. Her family life is rich and diverse and the qualities handed down to her have made her who she is, and for that she is grateful to those who came before her and the sacrifices they made in the name of love and family.

As Snyder writes, “I no longer view Mary and Luther as a child views a parent. Now, I see their full humanity—their hopes and dreams, their disappointments. The converging forces of racism and economics made it impossible for them to fulfill their full potential so they poured their hopes into their children. For that, I am eternally grateful.” With Dear Mary, Dear Luther, Snyder has come full circle, in publishing her parents’ love letters to each other, she has written her own love letter to them.