Book Review: Not Guilty of Love: The Jamieson (Vol 2) 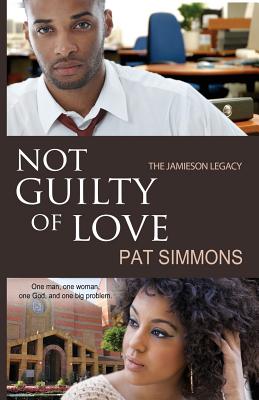 Read a Description of Not Guilty of Love: The Jamieson (Vol 2)

Christian Author Pat Simmons has written a wonderful sequel to her debut novel, Guilty of Love in her third release, Not Guilty of Love.  The main characters, Cheney and Parke Jamieson are back joined by the previous supporting characters, Malcolm Jamieson and his fiancee Hallison Dinkins.

This time although the storyline centers on Malcolm and Hallison's relationship; the Jamiesons with their strong family ties are an integral part of the story.  Despite being diagnosed as barren, unable to conceive a child due to an abortion with complications when she was a college student, Cheney is now pregnant with her miracle baby.  The Jameison family is elated; but the family's joy is wasted on Parke's brother Malcolm.

Malcolm is devastated by Hallison's conversion to her Christian roots.  Raised in the church, Hallison had reverted to a more secular lifestyle as an adult.  As happy as she was living her life as she pleased, she was constantly in conflict with her early teachings as a Christian.  The inner turmoil reached a climax for her in a Sunday morning service when she and Malcolm visited Parke and Cheney's church.

That morning Halliston re-commits her life to the Lord.  God instructs her to give up the most important person in her life to follow Him.  She had been taught that obedience is better than sacrifice so has no other alternative than to break off her engagement to Malcolm, cold turkey.  Malcolm has his doubts about her total spiritual conversion.  Although he doesn't mind going to church; he doesn't believe in the perfect Christian life and is unable to commit himself to God on what he considers such an extreme level.

Malcolm loves Hallison and wants her for his wife; yet he is unable to convince her to turn away from God's instruction.  As Hallison becomes more involved in her spiritual life, Malcolm becomes even more determined to follow his own destiny for his life.  He is wrought with pain and loss.  A man who can basically have any woman he wants, Malcolm starts dating a business associate who seems to be on the same page as he is, when it comes to God.    This woman seems like a good fit but as he gets to know her, he has doubts that his false pride will not let him  explore.  In the end, that proves to be a grave error in judgment,  But he just needs to get over Hallison, in any way that he can.

Meanwhile; a spirit-led man comes into Hallison's life and he believes she is the wife that God plans for him.  Hallison is confused, yet still determined to follow God she becomes friendly with Trey, her new friend.  This totally enrages Malcolm and he makes a fool of himself on more than one occasion.

What transpires is a story about the differences between right and wrong, the faith walk that most people struggle with and the complexity of family ties and unconditional love.

I found the same superb writing in this novel, that impressed me in the author's previous work.  She paced the story well, giving the reader a few surprises along the way.  The very well developed characters were a delight, especially the re-appearance of Grandma BB, the hilarious senior citizen with a grudge.  Grandma BB proves that Christians aren't perfect people.

Romance readers will enjoy this novel because it's not your usual Christian fiction.  It's a real love story.  Many times, Christian fiction is too preachy and full of literary fluff with a happily-ever-after storyline that only Christian folk can relate to.  This is not the case with Not Guilty of Love.  Simmons takes the time, the creativity and the imagination to give readers a story that almost everyone can relate to.  I'm looking forward her next book.  I hear this is a triloogy.

Note: This review was of an earlier version of Not Guilty of Love

Read CreateSpace’s description of Not Guilty of Love: The Jamieson (Vol 2).