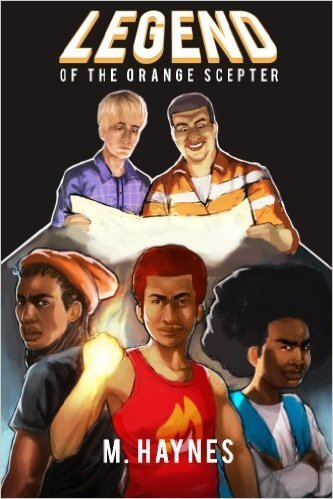 Read a Description of Legend of the Orange Scepter

It’s very difficult to write a Young Adult fiction. Also, the difficulty only increases when you add elements of science fiction and fantasy to the mix. M. Haynes, a Georgia native, accomplishes this feat handily, without much fuss, giving the reader a basic, entertaining tale of heroes and villains, Legend of The Orange Scepter, in an imagined future world of courage, resistance, and tyranny. Drawing on the Golden Age tradition of Sci-Fi and Fantasy including Arthur C. Clarke, Ray Bradbury, Ursula LeGuin, Damon Knight, Isaac Asimov, with a few samples of Harry Potter, The Lord of The Rings, and The Hobbit, Haynes conjures up this alt-world where a quartet of spunky teens take on a cruel, ruthless dark Queen whose power comes from a group of laser-firing androids and The Orange Scepter. Teen readers will quickly identify with the two lead characters, Donald Henton and Morgan Peters, old school buddies in their early teens. They love all things video games and comics. They are also in awe of the Elementals, who have powers to protect the people of Colorius from threats from within and without.

Most successful Young Adult novels must keep the action going, with colorful characters, snappy chat, and quick bursts of suspense. Haynes does this with an engaging list of personalities including the brilliant Professor Peters, his android creation Lauryn, and the teen Elementals – De, M, and Rod, all pledged to resist the evil Queen A.G.’s iron rule. When the Elementals, with their pal Don, go to Rumas, battling through the silver men, they are cheered by the public, who see them as “heroes in a world ruled by a racist guard dog.”

Like the superheroes in film and comics, the Elementals: De uses his fire breathing powers, while M and Rod electrocutes the androids, Mo freezes the metal men in place and Master Rickson works his potent magic on them. Their goal is to destroy the android-producing factories throughout the land, neutralize the repression by the robots, and the corrupt Queen A.G. with her green laser shooting eyes.

While the personalities of the lead characters are sometimes sketches, the strength of the novel is Haynes’ ability to move the story along. He loves action and confrontation. Witness this: “The Silver man and Master Rackson were in a dead beat battle on the first floor. The Silver Man was busy trying to smash Master Rackson with one of his hands currently shaped like a mallet, but the surprisingly nimble spell caster dodged every swing.”

What is the legend of the Orange Scepter? This is not a spoiler. This fact only enhances the enjoyment of this futuristic entertainment. The Orange Scepter, the national treasure of Redd Continent, has the ability to strengthen the natural abilities of anyone who has it. With the Orange Scepter, Queen A.G. could not be beat. The Elementals must remove it from the monarch if they will win.

Overall, Haynes’ Legend of The Orange Scepter takes us on a classic battle between good and evil. The final battle between the teen Elementals and the evil Queen and her metal minions is well worth the wait and should provide some thrills for the young readers. Impassioned, exciting, and well-conceived, the novel is a marvelous achievement.

Read CreateSpace’s description of Legend of the Orange Scepter.