Book Review: Telling It Like It Is: The Remarkable Life Experiences of My Aunt Edna 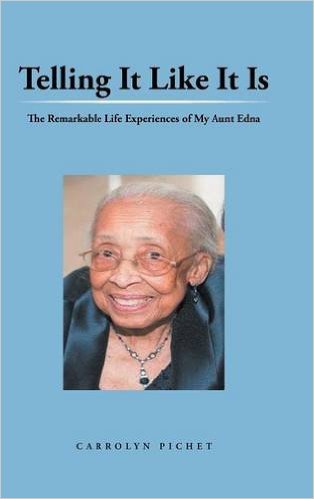 Read a Description of Telling It Like It Is: The Remarkable Life Experiences of My Aunt Edna

Telling It Like It Is, is equal parts historical biography, personal recollections, family memories, and self-help in the guise of lessons from a well-lived life. It is a love letter to not only a person, Pichet’s beloved Aunt Edna, but also to a long gone time and place—when neighborhoods were tightly knit communities and families looked out for each other. Filled with anecdotes and life lessons, favorite sayings are used as titles throughout the book and serve to highlight the many roles Aunt Edna has taken and played in her life—mother, fierce family defender, and advocate, to name only a few.

Pichet and Aunt Edna—Pichet’s mother’s sister—spent many hours together, sipping tea or Sprite, while her aunt regaled her with family anecdotes and memories. Those stories are here as an ode not only to a time past but also to her remarkable aunt, the fourth of seven children, who has seen so much, and whose straightforward and common sense advice could help us on our own journey through life.

“The most wonderful part about writing the book was the fact that in order to extract pertinent facts about her life and accomplishments, I’ve had the privilege of spending months in intimate contact with her… I spent captivating moments in her company, wrapped up in her love, laughing at her humor, being enchanted by her quick wit and intelligence, as she laid out her philosophy of life in general… The result is a stunning quilt in vivid detail, each square lovingly sewn next to the previous one.”

Born in 1924 in Washington, DC and ninety-two when the book was written, Aunt Edna is a veritable treasure trove of firsthand accounts of American history. She remembers the Great Depression, WWII and the bombing of Pearl Harbor. She recounts the country’s stunned reaction to it and Roosevelt’s retaliatory dropping of the atomic bomb on Hiroshima, and then Nagasaki. Her anecdotal recollections are far more engaging than any history book could ever be. This, in and of itself, recommends her biography. Beyond that, Aunt Edna offers the kind of insight that can only come from experience. “Back in my time, people were more aware of the children and the other people around them. It really took a village to raise a child, and the neighborhood and communities were just like tiny villages. Everyone sort of looked out for each other, especially the children. You spoke to your neighbors and knew them well. Today, I don’t even know my neighbors. People don’t want anyone around their children today, because they don’t trust them. People are different than they were in my day. People had kinder hearts back then. It may be because they needed each other more. It was all for one and one for all.”

I appreciate the lessons learned from our elders. Clearly, Aunt Edna is a woman full of spunk, sass, and sage advice garnered from a long life. As such, this biography of a remarkable woman, in a family of seemingly remarkable women, and her life lessons and historical accounts are insightful and engaging. The pictures from the Henderson family tree, articles about and by the Hendersons, memories and recollections from family also help to paint a colorfully multilayered picture of a time and a place. Because of this, I can forgive the meandering narrative and dizzying array of narrative elements: the poems and letters to and about Aunt Edna for instance. It makes for less of a straightforward read than a chat during tea with a much loved family member who keeps pulling pictures and letters out of her purse to share. And there’s nothing really wrong with that. What was far more distracting, was how much Pichet inserted herself into the narrative. I wish she had stayed in the background. There were too many direct addresses from Pichet to the reader alerting them to the gems to come. These comments were too common and thus intrusive. This would have been better served by letting Aunt Edna offer them up herself without preamble.

However, it is a small price to pay for an invitation to meet such an exceptional woman, and to witness the love, affection and respect between Pichet and her beloved Auntie, and to benefit from Aunt Edna’s charm, engaging recollections, wisdom, and common sense advice. We all deserve an Aunt Edna in our life and if you are not of those lucky ones who has one, her biography is a good option.

Read AuthorHouse’s description of Telling It Like It Is: The Remarkable Life Experiences of My Aunt Edna.