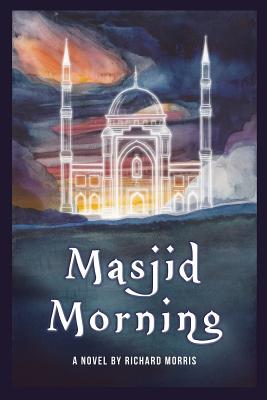 Read a Description of Masjid Morning: A Novel

Richard Morris’ Masjid Morning is a dedication to the millennial college student both embracing and learning how to live with religious and racial diversity. It is a testament to multi-racial relationships and exploration of current, dubious, religious anxieties and prejudices in regard to Muslims and their believed connection to terrorism. Through it all, Morris recognizes the importance of super-millennial attitudes exuding perseverance, the right to make our own decisions, and the triumph of love.

In their Maryland town, Amy’s family is rooted in its cultivation, history, and Christian dogma, while her eventual boyfriend, Atif, is a first generation Muslim from a respectable family. When the two fall in love, they learn about each other, their cultures, and the multitude of issues that come with, simply, being different. The construction of a new mosque begins a string of attempts to shut the project down, mostly induced by Amy’s ex-military father, Randall. Convinced that Muslims are the face of terrorism and exclusive members of ISIS, Randall's Islamophobia pushes his daughter away from him, and ultimately, the townspeople closer together as they identify with America’s ideals of religious freedom and brotherhood. In a Shakespearean end, readers witness the destruction 21st century racism can have on a small town, but also to the minds of those affected by it.

Morris easily pulls readers into this cat and mouse chase of growing affection between Amy and Atif, but also between the construction of the mosque and the continuous issues that digress its completion. We are left to wonder how far Randall will go to preserve both his pride and the purity of his Christian town. He becomes engrossed in his need to protect everyone from this potential threat, so much so that he becomes the feared ticking time-bomb, finally bursting at the book’s close. While these plots progress, we learn about Christianity, Islam, what it takes to execute a religious facility, and the struggles inherent to becoming an adult inclusive of how that is shaped and effected by family and one’s need to exercise their individuality. Morris could have really nailed this if he chose a different writing-method, something closer to first-person, perspective-based chapters, but his descriptive and richly convincing narrative held together purposefully, even if our climax and ending coincided abruptly and without further ado. As the short-and-sweet novel this is, Morris could have used the opportunity to lay bare the situation, creating an additional chapter, or two, to divulge, into the aftermath of Randall’s destruction, or the opening of the long-awaited mosque. Instead, readers are left to grip the heart-breaking admission of an undying love and the tragedy that is the close of Masjid Morning.

A staggering aspect of the narrative is Morris’ need to justify the permeating ignorance of our characters, particularly Amy and, especially Randall.

At their secret rendezvous points, Atif and Amy share the pillars of their faiths to each other. While these meetings allow the reader to engage with this information as our characters do, it becomes exasperating at Amy’s feedback. We find her throwing toddler-like tantrums that are either pleads for the saving of Atif’s soul, or senseless questions aimed at deconstructing all he has told her because she admits that she “doesn’t know anything,’ or just plain refuses to (ie: can one call upon Allah to win a football game). I have two reactions to this: first, how can we be so ignorant of the cultures and practices of others? Second, I found myself questioning the kind of society this story occupies, as the cross-association of Muslims and Christians is considered unacceptable, and the two groups seem to live in total ignorance of each other. A poor juxtaposition to this is the blatant racism personifying Amy’s parents—even Amy acknowledges that Hispanics “work cheaper,” a banal notion clearly adopted from her parents. How can people harbor an intense hatred and unawareness for a people they’ve never experienced? Randall Breckenridge is the exception to this, as he vigorously recalls his glory days in the military, full of “moozlim” killing in Somalia. While Randall’s insolence may have been bred, racism needs no justification. Some people are what they are, and in attempting to rationalize these kinds of feelings, Morris brings alive these stereotypes in narrative form, but, in doing so, he creates inconsistencies that are hard to overlook. I would select this from the shelves for the young adult romance discovered between two diverse characters with the odds against them…as an examination of bigotry and Islamophobia in the United States, not so much.