Book Review: Parable of the Sower 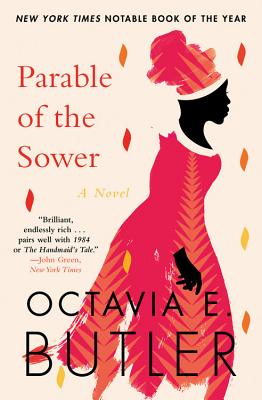 Read a Description of Parable of the Sower

Parable of the Sower, Octavia Butler’s sci-fi novel gives the reader an intimate look into the mind of a young philosopher. Lauren Oya Olamina is an eighteen-year-old empathetic thinker whose love of community establishes her as a leader with prophetic vision. Butler’s Lauren, the strong first person protagonist of the novel, is a reliable narrator that is immediately linked with the reader through the fictitious EARTHSEED philosophy:

All that you touch
You Change.

All that you Change
Changes you.

The only lasting truth
Is Change.

Butler informs the reader that these are the thoughts of a fifteen-year-old who is involved in teenage conflicts with her father, her siblings, and her boyfriend. She is a kid, but this gifted fifteen-year-old is living during a time when day-to-day life is being challenged by climate change, corporate dominance, racial prejudice, a fascist government, and looming slavery. Lauren is uncommonly aware of the dangers in her society, but as a teen her thoughts are given little concern, so she journals and writes. And from her thoughts spring EARTHSEED, a philosophy of unity. What Lauren writes about and fears as a fifteen-year-old becomes a reality by her seventeenth birthday.

Butler throws the reader into the survivalist life of violently orphaned teenagers; there is a little foreshadowing that prepares the reader a bit, but for the most part the reader is flung onto California highways in the year 2027 with addicted gangs, pyromaniacs, rapist, bans of thieves, child eating dogs, cannibals, and racists. Butler creates a dark time that is eerily familiar.

The novel begs for preparation and screams warnings against a near future brought on by climate ignorance, the theft of labor, inhuman economics, criminalization of poverty, corporate dominance, and illiteracy. Butler creatively addresses these ills throughout the work; her characters strive and love despite the attacks; families are created and friendships are formed. Butler’s writing brings light to precautions that could help avoid the bleak future while praising strong families, and family is not limited to biology. In Butler’s work, humanity’s survival depends on multi-cultural dependence.

Octavia E. Butler’s Parable of the Sower is a frightening read that will stay with a reader long after the book is closed largely due to the sad probability of the fictitious plot becoming reality.

Read Grand Central Publishing’s description of Parable of the Sower.