Book Review: I Take My Coffee Black: Reflections on Tupac, Musical Theater, Faith, and Being Black in America 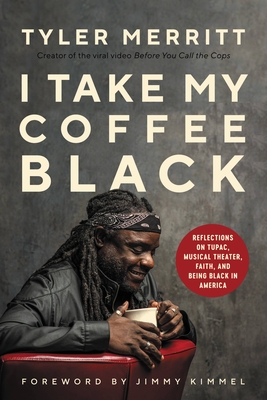 Read a Description of I Take My Coffee Black: Reflections on Tupac, Musical Theater, Faith, and Being Black in America

In his memoir, I Take My Coffee Black author, actor, musician, comedian, and activist, Tyler Merritt recounts, in his uniquely poignant way, the trials and tribulations of being a Black man in America. “As a 6'2 dreadlocked black man, Tyler Merritt knows what it feels like to be stereotyped as threatening, which can have dangerous consequences. But he also knows that proximity to people who are different from ourselves can be a cure for racism.” Merritt’s often humorous accounts are even more illuminating when we consider the inherent danger of simply being Black in America, made even more dangerous, if you’re physically imposing in any way, to people who are predisposed to prejudging you. That he is able to find humor in these situations attests to his grace under pressure.

One of Merritt’s most moving accounts is of a situation involving a white woman, seemingly uncomfortable and fearful, because of his size and appearance. He asserts, “Why should I have to diminish myself because you feel agitated with who I am—why should I have to edit all my behavior, hide, shrink, and apologize because your preference is that I don’t exist? I will not make myself smaller, without compromise.” This is an incident many Black people will be familiar with; that we should shrink or change to make other people comfortable. By flipping the switch and making white people aware that their reactions are biased, and their subsequent actions can all too often turn lethal, he not only raises awareness, he also holds them accountable. And Merritt has started a movement with his viral videos in the Tyler Merritt Project. “Before You Call the Cops” features Merritt speaking directly to the camera addressing the viewer as he personalizes himself, his beliefs, his life, his family, so they see beyond his physicality. In “Walking While Black” Merritt dons a hoodie and takes a walk through the neighborhood for all the Black men who no longer can, as he gives commentary on the times. His videos have been viewed by over 60 million people worldwide. That he should have to do that at all, speaks to the burden many Black people face because of racism, White Supremacy, and preconceived notions. What’s most impressive about his videos and Merritt himself, is that instead of internalizing these experiences, or lashing out, he’s turned them into teachable actionable moments.

In his book, Merritt passionately conveys his feelings during these interactions; his disappointment, fear, anger, and grief will resonate with many readers, regardless of their ethnicity. To always be fearful of how you’ll be perceived and treated based solely on your ethnicity and your physicality is exhausting. A cancer survivor Merritt has already overcome so much, that he wants to educate those who would judge him without knowing him, speaks to his grace and his wisdom, which are aided by his Christian beliefs.

Merritt opens the book describing his formative years growing up in Las Vegas as a military brat. He had a difficult relationship with a demanding and dispassionate father. His mother, who he calls his “rock” was his inspiration. She taught him from early on that he could be a changemaker. Ultimately, Merritt wants to give insight into, and a better understanding of, what it means to be Black in America, while also attempting to shatter stereotypical biases based on skin color. Overall, he wants to answer these questions: Is it truly important for people to see you without preconceptions based on race? Is it equally important to be liked without biased notions of inferiority?

Part of Merritt’s message is to show how everyday moments can make or break the most important relationships in his life, with the people around him and with himself. To do that he opens our eyes to the micro-aggressions Black men have experienced. For example: not getting into an elevator alone with a Black man, or crossing the street at night if he is approaching, or how simply misinterpreting his presence and actions, can have devastating and lethal ramifications. Merritt uses his experiences to illuminate how and why interactions like these can either positively or negatively affect our relationships and even our lives.

There are many compelling reasons for Merritt to write this book, especially as a man of color in a country where privileges are often not afforded to us. However, instead of simply taking white people to task he wants to open the channels of communication. Perhaps it's his double-consciousness of religion and race that helped shape instances of what he calls the “sliding door” concept. It's the moment when we choose one action over another and it alters the trajectory of our lives. Through his experiences Merritt shows that our reactions have far-reaching consequences. They can not only make a difference, they can alter the trajectory of a situation, a life, or on a broader scale, a society. Using humor Merritt aims to bring more love, and understanding into a world desperately in need of them.

Merritt’s tone and tenor and his unique sense of humor, even as he discusses serious and potentially dangerous stereotypes and situations are impressive and inspirational. He hopes these conversations can create a better understanding of who we are collectively as a people and a country. He has started an open and honest dialogue that could ultimately make the world a better place. Merritt’s journey will be relatable to not only Blacks in America, but to anyone who has felt judged, discriminated against, and misunderstood in any way, because of their looks, the color of their skin, their ethnicity, religion, gender, or sexuality. His message is twofold, don't shrink yourself to fit into someone’s insecurities or expectations, and don't prejudge, or discriminate because of your own prejudice or insecurities.

Tyler Merritt perfectly illustrates that the difficulties of life should make us better and not bitter. In I Take My Coffee Black, he reminds us that we have more similarities than differences and that they are what make us beautiful, strong, and will ultimately, keep us moving forward as a society.

Read Worthy Books’s description of I Take My Coffee Black: Reflections on Tupac, Musical Theater, Faith, and Being Black in America.