Book Review: Daughters of the Dust: The Making of an African American Woman’s Film 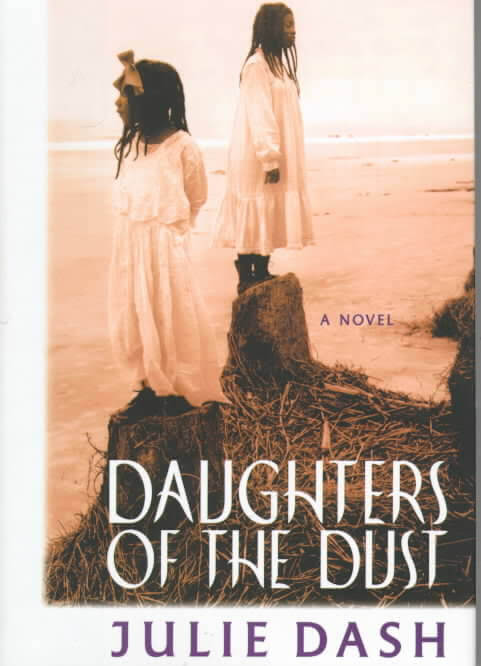 Read a Description of Daughters of the Dust: The Making of an African American Woman’s Film

This historical novel is actually a sequel to the movie of the same title. The book although steeped in the past, is wondrously present in the future. It expands the characters we were introduced in the movie.  However, you do not need to see the film first, the characters are introduced in detail, and stand on their own.  There are also numerous recipes for charms, for example, Dash includes a "home sweetener" recipe:

"Mix 75 drops of peppermint oil with 35 drops of eucalyptus oil, 10 drops of clove, and cup of spring water.  Shake the mixture around the four corners of the room to bring the nature inside.  As the mixture ages, the scent will become stronger." (p.23)

Once again we are transported to Ibo Landing, the Sea Islands, in Gullah country off the coast of  South Carolina.  We revisit the Peazant family.  The folks indigenous to the island speak  with a Geechee dialect ("De trunk right by de door.  Go on an don be mess with nuttin!")(p.11)  while other characters speak in standard English.  Many characters speak in a  storytelling tradition from the Yoruba and other African traditions and cultures.

The omnipresent conflict continues between those who remained on the island honoring the traditions of the ancestors from the motherland, Africa, and those who left the island to head north in an attempt to both literally and figuratively erase the stains from their past and from the indigo dye on their hands from working on the plantations.  A central character is Amelia Vernes, college educated in New York,  who wants to go to the island and do field work research for her senior thesis in anthropology, "The Colored People of the Carolina Coast." (Following  the advice of her professor, she must study herself before she studies others.)  Myown is Amelia's sickly mother who came over in the crossing/passing (the literal migration) over to the mainland, but supports her daughter's desire to return.  Amelia's relatives who immigrated and have remained in the United States cannot understand why such a trip is necessary since they have escaped their past and country ways with education and freedom in the north.

Dash has Amelia use a 16 mm hand-cranked camera which was cutting edge in 1926, to aid in documenting her thesis.  The camera is a loan from her professor and it,  like Amelia is a foreign entity to the residents on the island.  Haagar, Amelia's grandmother,  last seen in the film lying prone, nails digging in the ground,   because her daughter Iona decided to remain on the island with Julien Last Child, the last Cherokee Indian on the Island, is an elder stalwart is this tome, decidedly against her granddaughter's decision to go to an island she has only visited once at the age of six and that Haagar would rather forget existed. Haagar, now living in Harlem and having experienced both city live and island life, thinks the people who remained on the island are ignorant and uncivilized.   After having lost one daughter to the island she  is determined not to lose her granddaughter.

Amelia is puzzled by Haagar's disdain for the island and its customs and her mother, Myown's, love of the same island conveyed through her support of Amelia's decision to go.   Amelia is curious about her roots and needs to complete her anthropological study.    Dash writes wonderfully and lyrically through narrative, song, poem, and storytelling "as told to" the characters on the island. "They say you come to gather folk's stories?" and  "I got a story for you." (p.130) are lines uttered by island resident, Sallie Lee.  Sallie then tells her story in the chapter entitled "How I Come to This" as told by Sallie Lee. (p. 131) Other island residents do the same as Amelia's research continues.

Julie Dash is seemingly obsessed with "Daughters of the Dust."  When the movie of the same name was released in 1991(finished in 1988 and in search of a distributor), it was rumored that it was ten years in the making. After the movie was released, there was also a book entitled Daughters of the Dust: The Making of a Woman's Film.   Now, six years after the release of the first feature length theatrically released film to be produced, written and directed by an African American woman, we have the novel of the same name.  Not that I am implying that Ms. Dash is something of a one hit wonder, quite the contrary.  She was prolific before and after the film with three other films and has produced and directed videos for Tracy Chapman and Sweet Honey in the Rock as well as pieces for HBO and Showtime. Minimally a subtitle to the work would have helped to distinguish this as a separate entity.

Read The New Press’s description of Daughters of the Dust: The Making of an African American Woman’s Film.