Book Review: Unfinished Business: Black Women, The Black Church, And The Struggle To Thrive In America 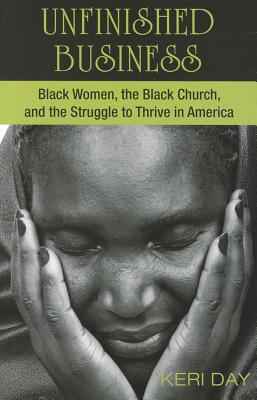 Read a Description of Unfinished Business: Black Women, The Black Church, And The Struggle To Thrive In America

While capitalist institutions and systems perpetuate impoverishment for so many black women and their children, poverty deeply affects their human personality… Hopelessness within poor black communities is often left unaddressed as poor blacks are blamed for their own poverty…

Poverty is produced and reproduced when the poor are locked out of America’s wealth-producing structures… My overall goal is to evaluate the social implications of black women’s poverty in this country and offer an understanding of thriving that can address their suffering and alienation.”
—Excerpted from the Introduction (pgs. 3, 4, 8 & 10)

In this age of mega-churches and prosperity theology, it is natural to wonder how many members of the black clergy even bother to minister to the needs of the least of the their brethren anymore. That question came to intrigue Professor Keri Day, Director of Black Church Studies at Brite Divinity School, after noting that Christianity is now a very different experience for sisters, depending on their social class.

While many black females have been fortunate enough to make the leap to the middle and upper-classes, the bulk remain poor with less and less hope for deliverance from their plight. In her book, Unfinished Business, Dr. Day outlines a plan to return to the times when poverty was a primary concern of the Black Church.

Annotated and academic in tone, this informative opus struck this critic as written more for a college-educated crowd than a mass audience. That being said, the feminist author does approach her subject-matter with an admirable zeal, making a case on behalf of not only black females but of women of any ethnicity who find themselves on the outside looking-in when it comes to capitalism.

For instance, she refers to the Welfare System as the “New Jane Crow” because it fails to address structural inequities in the American economy. That’s why she calls upon the Church to address a culture that “stigmatizes poor black women as deviant.”

Dr. Day’s fervent hope is that “By promoting socially-conscious capitalism among black businesses and capitalists, black churches can develop a theology of holistic prosperity that considers the thriving of all members within society.” Sadly, that’s apt to prove easier said than done in the face of an economic system all too comfortable with exploiting the human condition.

Read Orbis Books’s description of Unfinished Business: Black Women, The Black Church, And The Struggle To Thrive In America.