Book Review: What Next: A Memoir Toward World Peace 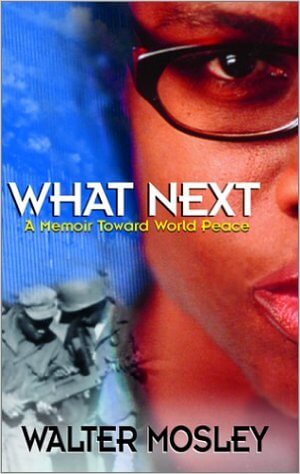 Read a Description of What Next: A Memoir Toward World Peace

During these times of turmoil between the United States and Iraq the creative community is using the full extent of its powers to offer solutions. Walter Mosley, President Clinton's favorite mystery writer, was compelled by the magnitude of 911 to take a break from the popular Easy Rawlins franchise to provide What Next: A Memoir Toward World Peace.

While world peace probably ranks behind drugs, families, jobs and economic stability on black America's list of concerns, Mosley's thesis of an African American initiative is nonetheless valid. The length (400-plus years), and severity (near annihilation) of the Diaspora renders Black Americans as the poster children for cruelty in the service of economic advancement. Mosley comments, "Because of the unique history and daily experiences of the African American people, I believe that we have a singular perspective on the qualities of revenge, security, and peace that will positively inform the direction of our nation's sometimes ill considered stands." Many will agree that the gravity and extent of our suffering mandates our interest in ensuring that other peoples throughout the world do not share our experience.

The conflicting experiences of Mosley's father Leroy, particularly his desire to feel like an American, is a running thread through out What Next. Especially striking was his father's temptation to participate in the Watts riots as payback for white America's innumerable injustices. But far from writing an incendiary screed, Mosley supports being an American in its original "founding father" sense, with concern for the freedom and dignity of all. "I wrote this book to be picked apart and dissected, not followed. I want to argue against the powerful urge for us to dominate our enemies. I want to bring about some discussion that might lead to an action."

Mosley places much of the current discord at the feet of American corporations in their quest for globalization, and he describes how, to advance capitalism, globalism is replacing democracy. Mosley urges thinking deeper beyond the issues that are seen and reported in the mainstream media. He parallels America's treatment of black Americans with its treatment of the Islamic world with a brilliant insight that is almost heretical. "I am appealing to black America. I'm asking us to stand up and enter the dialogue about our war on the Middle East, before we find ourselves deeply enmeshed in a logic of violence and murder that will put us on a par with the slave masters of old."

Mosley's proposed solution at first glance possesses all the force of a feather. "The most effective tool we have to work toward a world peace is our conviction to create harmony in the world. No strategy, no bomb, no amount of cash alone will bring us and our neighbors into alignment. If the American people today were to shift their fearful and angry hearts toward a desire for peace, the world would change quickly and wonderfully into the paradise we all desire’We are the richest and most powerful country in the history of the world. Our will and culture have created the atmosphere and the dialogues of the world, for good and for bad. If we give in to fear, or support the domination of the impoverished billions by our corporations, then strife, war and death are inescapable. And in that conflagration we too shall be consumed."

Mosley puts forth these "Universal Ideas" that he would like to live by:

I cannot be free while my neighbor is wearing chains.
I cannot know happiness while others are forced to live in despair.
I cannot know health if plague and famine thrive outside my door.
I cannot expect to know peace if war rides forward under my flag and with my consent.

This "conviction to create harmony in the world" seemingly boils down to all of the impact of a religious cult's plea to "Visualize world peace". But upon deeper consideration What Next is a command and not a plea, and Mosley's between-the-lines message is really where the action is: Forget about fear and apply our energies, resources and good will to ensuring that everyone around the world gets a fair shake. Let's assume that this world can provide plenty for all and just get on to the business of equitably distributing the goodies.

What Next's major shortcoming is that Mosley lays out a grand prescription, but is light on the specifics of executing it. There are a lot of questions in between points A and Z such as, How can we ensure that African American sentiments toward world peace have a meaningful voice? What are some practical ways to foil globalization? Or, forget about insisting upon world peace -- let's discuss how to ensure harmony in the black community? What can be done to diminish color consciousness? How can we to decrease the community's consumerist mentality? How can we correct our community's long-standing inhumanity toward women and gays? Mosley does not address the weakness in literacy and computer literacy that plague many African Americans. Or the hip hop contingent's propensity for gansta violence as the solution to all ills.

At 109 pages this slim, unassuming book is fast, easy reading. The book is almost entirely Mosley's opinion and some of his contentions would have benefited from more scholarship and documentation. What Next will be an excellent choice for book clubs and for Black History Month. Also What Next is a good choice for black families to read aloud together and discuss. It was probably Mosley's intention that book clubs and individual readers fill in the blanks on some of the details he does not address.

In What Next Mosley is speaking big truth: African Americans, as the United States' permanent doormat for the last 400 years, do have a unique perspective and say so on the question of world peace. This is a formidable and daunting responsibility. Will black America step up to the plate?

Many readers will conclude that Mosley is coming out of left field with this warm and fuzzy prescription for world peace. But is he really? His recommendation is neither fresh, nor original. It recalls concepts that are at least 2004 years old, and were first promoted by a Jewish carpenter of some renown’

Read Black Classic Press’s description of What Next: A Memoir Toward World Peace.