Book Review: All About The Beat: Why Hip-Hop Can’t Save Black America 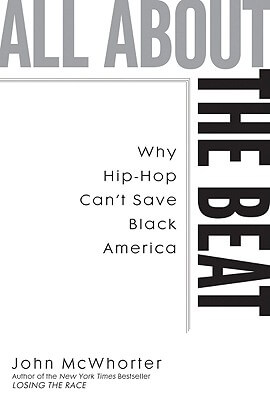 Read a Description of All About The Beat: Why Hip-Hop Can’t Save Black America

’There is apparently something about hip-hop that distracts people into, in some part of their brains, seeing something in it that is' inspirational. From what I see, it's the beat’

People hear a certain truth in a statement when it is uttered over a beat’ Rhythm is deeply seductive. Even babies like it. It is so seductive that it can discourage reflection, and in the case of the idea of rap as politically significant, I think it is doing precisely that.

Is the Hip-Hop Generation a political movement worth taking seriously? John McWhorter vehemently says ’No!’ and he has plenty of reasons why. First of all, he says that Hip-Hop Generation ’is nothing but a term of emotion’ that sounds cool, and that ’sounding good is not the same thing as changing the world.’

He also points out that while some artists might be recording socially-conscious rap with positive messages, a Hip-Hop Revolution could never be spearheaded by a brand of music nobody wants to listen to. Afterall, it's easy to know what's popular, and the weekly charts indicate that fans prefer classic gangsta’ imagery and values promulgated by BET where scantily-clad sisters are still referred to as bitches and hos.

According to the author, females unfortunately seem to revel in the abuse, dancing euphorically while singing along with lyrics which demean them. Why so? Professor McWhorter, a linguist by trade, says it's all in the beat. As he explains it, ’The problem is when we start pretending that rhythms and inflections ’ color, we might say ’ constitute coherent political insight worthy of attention.’

As a wordsmith, he knows that the cadence and pulse of rap might be seductive, but it is no substitute for logical conscious thought. He cleverly shows how inherently limited hip-hop actually is as a form of expression, given that lines have to rhyme. For instance, try rhyming a word with ’purple’ or ’orange.’ Having to rhyme reduces ones options.

I know that Mr. McWhorter's prior work has generally been dismissed by his detractors as the rants of an effete, out-of-touch, neo-con. I probably trashed a couple of his earlier books myself. However, this one is worth reading, if only for its highlighting a serious flaw in African-American culture which allows cadence to serve as a substitute for substance and critical thinking.

Read Knopf’s description of All About The Beat: Why Hip-Hop Can’t Save Black America.