Book Review: From Dusk to Dawn 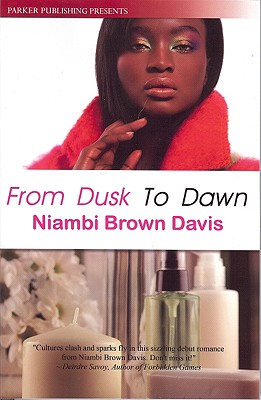 Read a Description of From Dusk to Dawn

The opening chapter of From Dusk To Dawn by first-time novelist Niambi Brown Davis reads like your average romance novel, but this reviewer found that the similarity between this novel and most romance novels ends right there.  Much to my surprise and delight, I found the storyline to have far more substance than boy meets girl.

When the beautiful, widowed Ayo Montgomery meets Bilal Abdul-Salaam, more than their religious beliefs clash.  Ayo is an independent, Christian woman in her forties who has survived the trauma of losing the love of her life after only two years of marriage.  Her son, Kedar, is  a college student progressing well in his studies.  They have a mother/son bond that is highly gratifying.  Ayo is the owner of a bath and body products business. She is surrounded many friends and family. They give her much support and love in the business as well as in her life.  The last thing Ayo expects is to get involved in a relationship with a younger man.

Ayo has not had a serious relationship since Maurice her young husband,  died twenty-two years ago. Maurice was a hard act to follow and Ayo has not considered remarriage.   At the time of his death, they lived in his homeland of Trinidad.  He was an international photographer killed while covering a civil uprising on a neighboring island.  Ayo returns to the D.C. area to raise her son and try to find her way back to reality.  Playing the mating game is not in her scheme of plans.

Bilal is ten years Ayo's junior and an extremely attractive African American, Muslim.  Ayo has hired him to appraise the extensive collection of pottery and glass items she inherited from her late mother.  Even before Ayo meets Bilal, she has several pre-conceived notions about Muslim men.  These notions put her in a mood of total mistrust when he comes to her home to appraise the collection.  But she never expected the fine specimen of Black manhood that stood at her door.  Taken by surprise, she is instantly attracted to the handsome Mr. Abdul-Salaam and he is equally attracted to her.

His parents were members of the Nation of Islam under Elijah Muhammad and were activists during the Black Power era.  They later became Sunni Muslims and Bilal was born into the Islamic faith.  Both Bilal and Ayo came from families who taught them the importance of pride in their heritage and and a result, one thing that they shared was a common interest in thie culture and their heritage.

Although Bilal is educated, cultured, financially stable and a strong force to be reckoned with, Bilal and Ayo are like oil and water when they first meet.  Yet neither can deny the strong attraction they have for one another.  Bilal has been anxiously seeking his soul mate and the woman who will bear the children he so seriously desires.  He finds those qualities in Ayo.  At her age and with her medical history, is that at all possible?  Will his family accept this woman who is not Muslim?  Will her adult son accept this younger man as his mother's mate?  As the couple comes together and seeks to unite despite their differences, they find themselves facing  many challenges.  They also face several instances where they misunderstand one another and jump to conclusions that are not the truth.  However; they are persistent and true love prevails, despite the complicated road that they must travel.

For a first time author, Davis has done a great job.  Her writing is clear, crisp and flowing.  Her descriptive settings give you a real feel for the different locales in the novel.  Ayo's love of the West Indian culture that she lived with her late husband is clear.  Bilal's strong family ties show an African American family in a positive light.  I also found the author's care to detail in exploring the truths about Islam a refreshing addition the story line.

From Dusk To Dawn is more of a relationship novel than a romance novel.  Davis took the time to create deeply developed characters in not only her main characters but in her supporting characters as well.  She draws the reader in with interesting people. The author takes the reader inside both the psyche and the heart of Ayo and Bilal who prove to be complicated human beings.

I really enjoyed From Dusk to Dawn for all of these reasons.  I am looking forward to more books from this very enchanting author.

Read Parker Publishing’s description of From Dusk to Dawn.