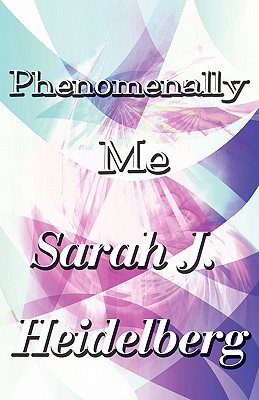 Read a Description of Phenomenally Me

In a dark room with a blue light
In the basement, music just right
Nothing going down but the
Mellow sounds of Mr. DJ's turntables
Going round" Boyz II Men croon
As we groove to the beat
From "Blue Light White"

Phenomenally Me is the first collection from Kansas born African American poet Sarah J. Heidelberg, and a lively and impressive compilation it is; by turns emotional and thoughtful, joyful and melancholy, blending the discipline and technique of formal lyric verse with the brashness and daring of performance poetry.

I can hear the mouldy figs of the Poetry Establishment now, "Love poetry? How—trite!" Have they been so long in the House of the Dead, mummifying Robert Frost, that they have forgotten that Eros, God of Love (Erzulie in the pantheon of Voudon) has been the most steadfast patron of verse? Have they already forgotten that the God/Muse was propitiated by Ancient Egyptians, praised by the Babylonians, puffed up in Sanskrit, Latin and Greek?

With titles like "Blue Light White", "Roses (or the lack thereof)" and "Soul Decision" the mood of these pieces is mostly melancholy. In "One Warm Heart to Live" she writes, "Why is it in love, you never go back"—a blues lick if you will.

The next group of five poems is gathered under the title "Pagan Poetry". "Magicians" and "Portents and signs" remind us that this we live in the magical Age of Aquarius, that poetry has its roots in spell and incantation and that the poet is the ultimate Conjure Woman. Still, as this poet reminds us in "To the Clairvoyant";

In the following section, "Phenomenally Me (Celebrating Myself)", Ms. Heidelberg, like Whitman, celebrates and sings herself in 10 easy pieces. "I was Born in the Wilderness", she states. "Pretty women wonder where my secret lies" she teases in "Phenomenally Me". She chants her own "barbaric yawp" in "Evolution".

And then we have the section called "Honoring God's Creation".

Many of the first poems were prayers, hymns and psalms. Holy songs. Praisesongs. It has been more than a century since Nietzsche, mad poet of the Overman, sang, "God is dead!" A reading of most modern poetry anthologies would convince the reader it must be so.

From recent events—the rise of the Christian Right in this country, a resurgence of fundamentalist Islam abroad—one might conclude that the rumors of God's death, to quote Samuel Langhorne Clemens, "have been greatly exaggerated". In pieces like "The Vessel", "Passion-Prayer Request" and "Sinner" Heidelberg suggests that He (or She or They) is, as the old gospel song says, "still on the throne".

The 11 poems of "Poetry" examine the process of Poetry—and then, more Controversy: "To Let Me Be" and "Born at Conception" take the Pro Life stance in the abortion debate — a stance not common in the liberal arts community — but isn't the debate, after all, about Freedom to Choose?

Finally there are 10 elegiac pieces in the section "Remembrance"; "Airborne (for Jackson), "Tribute to Aaliyah" and my favorite "Kansas", which with its long lines and intense personal reminiscing bring to mind Ginsberg's "Kaddish".

Reviewing any collection of poetry is bound to be a highly subjective endeavor. When a collection is a poet's first the Reviewer must also suppress the urges to measure the effort against what you find in the Norton Anthologies and to suggest how they might have been better executed (had said Reviewer tackled them).

In his or her anxiety to render Unto Art the Reviewer forgets to tell the reader whether or not he or she enjoyed the work.

That said, I enjoyed the book and think that you might too.

It is Ms.Heidelberg's desire that these poems be read aloud. PHENOMENALLY ME, however, is not a mess of doggerel jotted down on napkins ten minutes before she recited them at a slam or open mic.

It is a carefully crafted blend of classical and modern influences, feminism and post feminism. It would be a welcome addition to an update of the Ras Baraka and Kevin Powell anthology, IN THE TRADITION.

PHENOMENALLY ME is new wine in new bottles, and Sarah J. Heidelberg is a right poet for the New Millennium worthy of her icons, which include Jessica Care Moore, Alice Walker, Nikki Giovanni, Sonia Sanchez, and Sylvia Plath.