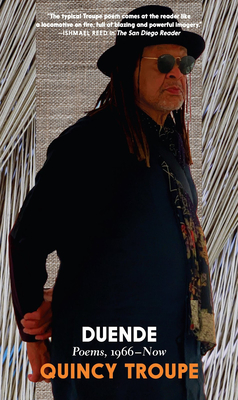 Poet Quincy Troupe’s literary magic has elevated him to the forefront of modern American writers. Born in St. Louis, Missouri, he, the son of a catcher in the Negro Leagues, ventured to Los Angeles after a stint in the army, where he conducted writing workshops at the famed Watts Writer Workshop. A career of teaching in several elite domestic universities, as well as distinguished foreign academic institutions, only inspired his love of the word and its many configurations.

Troupe first gained notice among the giants of the Black Arts Movement such as Amiri Baraka, Gwendolyn Brooks, Jayne Cortez, Nikki Giovanni, Sonia Sanchez, Larry Neal, Haki B. Madhubuti, and Hoyt Fuller. One of the highlights of his career is the ground-breaking Giant Talk: An Anthology of Third World Writings, co-edited with Rainer Schultze. His most best-selling nonfiction books probe the life of controversial jazz trumpeter Miles Davis, teaming with the musician on his Miles: The Autobiography (1989) and his unvarnished version of their association in Miles and Me (2000). Collaborating with Chris Gardiner, he wrote The Pursuit of Happyness (2006), Gardiner’s inspiring autobiography. The book was a New York Times bestseller and captured the nation as a hit Tinseltown film with Will Smith.

However, Troupe has currently released his crown jewel, Duende: Poems 1966-Now, a compilation of his key works from days past and current favorites. Supposedly ‘Duende’ was a word first attributed to Spanish word wizard Federico Garcia Lorca meaning: ‘a dark and elusive through which artists have the ability to channel their creative force.’ Culled from his 11 volumes of poetry, this collection includes: Embryo (1971), Snake-Back Solos (1978), Skulls Along The River (1984), Weather Reports (1991), Avalanche (1996), Transcircularities (2002), The Architecture of Language (2006), Ghost Voices (2019), and Seductions (2019). To freshen up the book, there are a quite few new selections that are total mind teasers.

This mammoth assembled work, featuring the essential verses of a 50-year career, delves into the usual topics of the premier poets of our modern age. Troupe’s topics cast a wide net, covering urban dilemmas, climate change, domestic and foreign politics, African American cultural traditions and rituals, crime and homelessness, life cycles, love and loss, travelogues, and nuclear mishaps. The Troupe lyrical hallmark combines a heady blend of the rhythm, tone and melodic forms of jazz, rap, and soul into provocative swirls of language and truth.

Through the volume, Troupe heralds our community’s culture and music, especially blues, ragtime, and free jazz, highlighting such legendary pioneers as Satchmo, Bessie Smith, Dizzy, Monk, Sun Ra, Bird, Lady Day, Miles Davis, and Dinah Washington. In “Chicago,” he sums up the bittersweet joy of Howlin’ Wolf’s blues: “These streets belong to the dues/ payer, to the blues/players/ drinking whiskey on satdaynight, muddy waters & the wolfman howlin’ smokestack lightning,’ how many years, down in the bottom.”

Or his tribute to the creator of “Satin Doll” in “The Day Duke Raised: May 24th , 1984: “above those clouds of duke wheeled, his chariot of piano keys, his spirit now levitated from flesh & hovering over the music of most high.”

He tackles the mystery of age astutely in “Reflections On Growing Older:” “my roped, rasta hair snaking down in coiled salt & pepper, vines twisted from the march of years, pen & ink lines etching my swollen face, the collected weight of years swelling my middle, the fear of it all overloading circuits.”

The Troupe panorama deals wisely with the turbulent crisis of international political mayhem in a rebellious Africa and particularly a struggling Haiti in “Perennial Ritual: “O, they’re shooting out the lights of port-au-prince, once again, they’re turning people into zombies with their snake-eye guns, they’re trying to kill the moon in a dreamer’s eyes once more, they’re feeding the vacant-eyed poor with teaspoons half-filled with garbage, they’re lining up beggars & killing their hunger again, they are goose-stepping to the rhythm of bullets.”

Like Neruda or Vallejo, he can wear his heart on his sleeve and embrace the magic of romance in “Your Lovers’s Eyes Speak:” “your lover’s eyes speak, to you so softly in this, place of wind, sea, bright blue sky, sunlight after the gray lifts, stuns your face into smiling.”

And he knows what a ridiculous strategy of terrorism as interpreted in his “2002 Manhattan Snapshot: The War On Terror:” “it was money spent on the war on terrorism, eye thought, did they really think osama bin laden or saddam Hussein would be caught dead or alive in a car in manhattan.”

The loss of young Black lives, our future is not lost on this poet’s vision in “A Dirge For Michael Brown, Tamir Rice, & Trayvon Martin:” “where does life-force of breath go after flesh falls away from bone, does it rest in the womb of memory, raise up the spirit inside ghost voices recognized once as bodies carrying names of michael, tamir, trayvon, so many other young black boys & girls with bright eyes, looking into a future of dreams before cut down by spitting lead.”

And yes, another poem that scores high marks is the Orange Man as our former President, who has corrupted the American ideals with his greed and obsessions with power in “Trump’s Legacy To Black Americas:” “first of all he lied about how rich he was, lied about his fake teeth, fake hair, lied about how great a job he was doing, lied about almost ever, yet many people refused to believe he was lying when he was lying on camera in front of their eyes.”

Many readers will shy away from the sheer bulk of this treasure trove of poems, totaling 656 pages of unvarnished common sense and truth. However, it’s worthy of your purchase. Back in the day, poetry was used to tell stories of life and death, joy and sadness, love and disappointment, while celebrating the mythic figures of sports, culture, and politics. Quincy Troupe’s work contains all of the classic poems’ ingredients, designed to bewitch and cast a spell on the reader. This is truly impressive work.