Book Review: The New Age of Empire: How Racism and Colonialism Still Rule the World 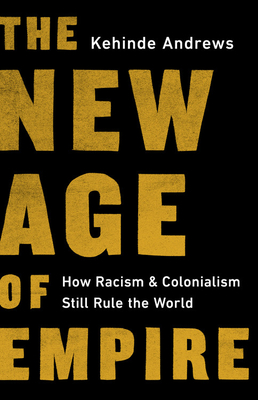 Read a Description of The New Age of Empire: How Racism and Colonialism Still Rule the World

It’s always beneficial to understand how learned minds, from abroad, view our current world with all its defects. It’s especially pleasurable when it’s one of our most distinguished intellects from Britain, Kehinde Andrews, who regularly writes on culture and politics for The Guardian and The Independent. He is the author of Resisting Racism: Race, Inequality and the Black Supplementary School Movement and Back to Black: Retelling Black Radicalism for the 21st Century. Andrews also edits the popular Blackness in Britain book series.

This updated version of his seminal book, The New Age of Empire, has shaken up academia and historians in Europe and the Caribbean with its penetrating analysis. As historian Robin D, G Kelley, author of Freedom Dreams: The Black Radical Imagination, called the book “a provocation,” and adds: “…we are still living this imperial nightmare, still reaping consequences of contemporary racialized violence and exploitation. The lesson: no freedom under racism, no future under capitalism, no justice without decolonization.”

Andrews, a major proponent of Black radical criticism, examines the golden age of anti-Black colonialism and its aftereffects, which are not being taught in our current history classes. He labels the major instruments of colonialism, supporting racism and imperialism as The World Bank, The International Monetary Fund, World Bank, World Trade Organization, and the United Nations. He slams the false notion of diversity among the “global elite,” for only the most corrupt can join this tainted fraternity,

It’s very timely that the book opens with the 2020 George Floyd killing and the huge protest of resistance that followed the police murder. The British critic terms the Floyd killing as “the straw that broke the camel’s back, coming so close on the heels of the lynching of Ahmaud Arbery and state-sanctioned murder of Breonna Taylor.” He mentions the killing as one of the most significant events to rock the foundations of racism, genocide, colonialism, and imperialism.

As for the Covid-19 outbreak, he writes how the virus killed the poor, the vulnerable, and unprivileged ethnic minorities. The brutal truth, he notes, is that racism takes years off a life. Poverty takes a terrible toll, killing more than nine million people globally each year. Also, a child dies every ten seconds because of a lack of food or water. He names three culprits in the global poverty scheme the UN, World Bank, and the International Monetary fund.

Andrews punctures the accepted myth of science, industry, and politics were fundamental to building the power of the West. His theory of how the West was made is tied to the three plagues of genocide, slavery, and colonialism. He further argues that the colonialism of the West has absorbed the negative concepts of white supremacy, incorporating the severest racial hierarchy. Currently, he links Trump’s “Make America Great Again” theme to a widespread colonial nostalgia. White Americans want the good old days to return, just as the Brits want to return to the glory days of the British Empire. The British critic writes: “Her Majesty may be the premier symbol of Whiteness on this planet.”

Look at the media headlines, he writes. Western imperialism features violence as a key ingredient in building power and influence and sexual violence against women is a universal tool for control and aggression. “White men were deemed to be at the top of the food chain of human beings, while women were thought to be incapable of rationality because of their troublesome biology.” Patriarchy was an underlying system of this system along with white supremacy. The colonial logic detests multiculturalism, immigration of colored races, and globalization.

In his heyday, conservative commentator Glenn Beck did a parody of the famous “I have a dream” speech, bringing a throng of white Tea Party supporters to the Lincoln Memorial, accompanied by Rev. King’s niece, Alvida King. He attacked Obama as a Black racist, aided by the King relative, who said it’s not about the color of skin, that there is only one human race and unity.

Conservatives believed in racial science. John Locke, one of the popular philosophers in 17th century England, believed subhuman blacks were the product of African women sleeping with apes. Voltaire and Hume could not conceive that lesser races were equal to whites. The American framework of rights considered that all men were created equal, except blacks. The 1787 Bill of Rights ruled the enslaved should account for 3/5th of a full white human being.

When a human being is classified as subhuman, it is very easy to end a life. One of the largest genocide records belongs to America, rivaling the totals of the Nazi holocaust and the huge numbers of tribalism in the African underdeveloped countries. For example, Native Americans were erased from the lands and eventually moved onto reservations where they would not interfere with the development of the United States, Andrews notes.

Transatlantic slavery was supposedly abolished in 1807, yet it continued until 1838. It was the fuel that powered Western development and its huge wealth allowed its imperialism to overtake the world. The triangular trade with European ships going to Africa, then delivering its human cargo to America to provide labor for the cotton fields. When slavery ended, it evolved into the next phase of colonialism solidly constructed on racial hierarchy and exploitation. Western corporations grew excessively rich by exploiting the people and resources of colonies, such as sugar cane, rubber, and oil palm. This fact continues today.

One of the most important segment is the redefinition of the empire concept, according to Andrews, and its accompanying version of Western imperialism. He gives us a brisk discussion of the competing European nations states and the remodeling of their cultural and political goals after the First World War and the Great Depression. New plans to update those systems were put into effect after the Second World War.

In his pivotal chapter, “The non-White West,” he accuses former President Trump of launching a trade war against China in 2018, trying to reestablish American economic protectionism. While touting Putin’s Russia as a possible ally, he slams China as our major enemy of democracy, noting its penetration in Africa’s economy. He also concludes Trump’s “tragicomic handling” of the Covid-19 onslaught and the rise of the Black Lives Matter protests in the wake of the Floyd murder provide him to boost his political strengths and recruit more supporters leading to the January 6th insurrection. His millions of voters were “seduced” by the culture of Whiteness.

Maybe this book should be taken as a call to arms or a dire prediction. As Andrews writes: “But make no mistake, whether spurred by revolution or tipped into collapse under its own weight, the West will eventually fall. Malcolm was right when he warned that it will be “the ballot or the bullet, liberty or death, freedom for everybody or freedom for nobody.’”

When you pick up this book, be prepared to look at the dreaded concepts of racism and colonialism in a new, informed way. Andrews’ The New Age of Empire will take the reader beyond the trite history books and the grim headlines to the raw truth of culture and politics. This is real food for thought and action.


Read Bold Type Books’s description of The New Age of Empire: How Racism and Colonialism Still Rule the World.