Book Review: Behind the Dark Veil 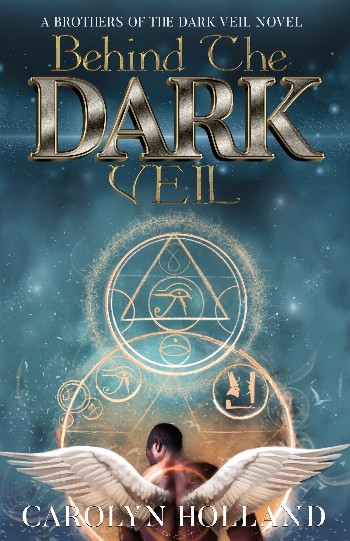 In a effective novel of horror and fantasy, New Jersey native Carolyn Holland’s Behind The Dark Veil, has all of the literary stylings of the trendy Afrofuturism concept. It is set in 1794 in the golden age of American slavery. The author moves backward in time when a privileged noble, Marcel Benoit, is caught shamelessly in Paris with the wife of a benefactor. Scandal ensues in 1724 as Marcel’s life goes down the drain, from aristocratic comfort to wretched poverty. Meanwhile, a judge passes a death sentence on the luckless Pierre Wolf, who has killed his entire family with a hatchet. He sentences Wolf to the gallows to the approval of those in the courtroom.

With a striking engaging narrative, Holland paints a somber picture of the man’s last hours in the prison chapel with Father Joliet, the chaplain, who tries to spiritually comfort the killer. Wolf says he has remorse but can’t understand his actions. While the chaplain prays for his soul, Wolf attacks him, strangling the holy man and changing into the garb of the priest, then leaves the chapel. Bewitched by demons, Wolf escapes with Marcel after killing a few guards. Later, he teams with Clidmont Etienne, his wife, and a young girl, for a ship to the New World, and the recent murder of Marcel Benoit.

The Afrofuturism concept emerges in full effect when the author places her characters in Old Louisiana. Clidmont and Wolf become fast friends, hunting and drinking, with the generous aristocrat promising Wolf a portion of land and a cabin down the road. Nearby, the village of Cyprus is full of a motley crew of prisoners, slaves, and bonded servants. It is surrounded by a deadly swamp, diseases, demons, and Indians. Suddenly, Wolf, under the influence of demons, kills Clidmont and his wife and slashes their daughter’s throat.

Holland takes the Afrocentric view of the futuristic tale when she positions Wolf assuming the identity of Clidmont Etienne and his land, and the creation of the infamous Magnolia Hill Plantation. Unlike the fabled sagas of Mandingo and Roots, she constructs “the plantation itself was a boil on the face of the earth and a blot on humanity. A place where other planters threatened to sell their slaves off when they wanted to scare the sweet bejesus out of them.” Holland layers the slavery theme with a hybrid concept of the caste system of the mythic silent film Metropolis and the vampire themes of the classic Universal horror films of the 1930s.

Rather than creating the stale European mix of time and space, she moves to reconstruct the African past and the African American present, through our community’s culture, identity, and power. The perfect setting for the terror is the ongoing racial conflict between whites and blacks, between the oppressors and the oppressed, on the blood-drenched soil of the plantation located on the mighty river between New Orleans and Baton Rouge. Like all plantations at that time, it is a “southern fiefdom,” where the elderly Clidmont is the deranged king and his son, Claude is the perverted prince. No woman of color is safe from their racist desires.

“The slaves at Magnolia Hill were expendable commodities,” Holland writes. “They were used and tossed away like a pair of beat-up old shoes that had lost their shine. The slaves that weren’t killed outright were either worked into an early grave, or they had their spirits beaten out of them to the degree they became the walking dead.”

Note the female healer, Sorrow, who was not yet healed from the death of her own baby, took all of her energy and effort to deliver the white mistress’ baby. This is the same woman who watched Sorrow’s man get whipped to death and fed to the pigs. Sorrow molded a black candle into the shape of the pregnant mistress and Masta Claude. Also, she prayed to the Orisha goods to bring suffering to the white couple.

It is common knowledge that women did not last long on Magnolia Hill. When the baby comes out dead, Masta Claude screams at Sorrow to let his woman “bleed like a pig stuck with a pitchfork.” Sorrow never met a white person she didn’t hate. She hated Clidmont Etienne and he is her father. He and his son were held captive by demons, drinking and whoring all night. Sorrow tells her daughter, Flossie, to hide until she signals to come out. The son, Claude had been sniffing around her “like a randy old hound.”

Hoping to shape her fate, Sorrow gets out her Ikeke beads to pray to “smite” Clidmont so he cannot walk, talk, or sleep. She does this while she listens to the white men ravish a young black girl in tandem. She opens her soul to the African deities: Elegba, Obatala, Shango, Ogun, Oshun, Oya, and Yemaya. Truly, she is an Obeah conjure woman who wants to protect her community, especially the women.

The imaginary world Holland builds is impressive, notably the realm of half-breed angels also known as Nephilim, with its caste system of Raphaim, Gibborim, and Anakin. The Nephilim society consists of Rephaim or the upper class, the Gibborim make up the middle class, while the Anakin is the lower working class. The Raphaim members of the Grand Council answer to the powerful Nephilim generals known as the Brothers of the Dark Veil. The elites practice an ability to raise the Dark Veil, a supernatural wall of protection behind the Nephilim that can exist, unknown to humans.

A crisis occurs when an engagement dinner in honor of Ephraim of the House of Armers and his fiancé Nephthys of the House of Samsaveel is scheduled. It’s an arranged marriage. The hunky Ephraim, adored son of Silas, is accustomed to women falling at his feet. He wants to join the Gabborim army under the guidance of the Brother of the Dark Veil. His beloved is pretty but he feels nothing for her.

Meanwhile, Jubal, a runaway slave with a hunger for Abena, a lovely woman of the African-Haitian race, knows she doesn’t want to have anything to do with him. Abena lives in an armed camp of runaway slaves or the Maroons. Her father, Francois Andre, a voodoo priest, led the band of slaves to the swamp and stole from nearby plantations.

Ephraim is transfixed with the sight of Abena, bewitched by her nude body, wading in the creek water. He wanted her and she wanted him. Sparks fly and they make love in a sizzling scene worthy of one of those Harlequin potboilers. The soldiers are sent to search for him, discovering that he is under a carnal spell of one of the Maroon women, meeting her each night. However, mixing between Nephilim and humans is prohibited.

All through this novel, Holland touts respect for the Black body, especially our women. Flossie knew whites and slaves were afraid of Maroons, but she was not. She hated whites. It is for a good reason for when Sorrow, her mother, was in the Big House, she was respected, but now she is in the fields. She is treated like dirt. When Ajuma meets Flossie, he is immediately seduced by her beauty. However, he is torn between feeding on her or surrendering to her pleasures. King Zion recognizes Ajuma’s desires with a human but it is at odds with his role as general. He understands the sweetness of human blood but he orders Ajuma to wear a French letter whenever he is intimate with her.

Holland depicts the vicious cruelty inflicted on the slaves who cut the cane and stack it on the mule-drawn carts. The white overseers whip a pregnant Flossie to instill fear among the slaves. Even after her son, Jacob is born, a drunken Claude Etienne beats her and kills her son. Still, Flossie, along with her family and community, finds strength and courage to withstand the series of white oppression.

To spice up her narrative, Holland inserts a wild, raw segment about the infamous New Orleans Storyville District where Monique and her girls provide romps of erotic heat and female intrigue. They cater to the white male obsession for black flesh while Monique becomes “the adored mistress of a white man.” Also, there is a crazy bar scene with a unique collection of devils, demons, imps, and rebellious angels where anything goes. It reminds me of a signature scene in the Star War series. The melee between the sharp-clawed, fire-breathing demons against the experienced Nephilim soldiers is a real hoot.

Fresh contemporary tales of good and evil, cloaked in African and African American history, a spoonful of Sun Ra and Octavia Butler, and a sprinkle of forbidden love make this gem an exciting read. Holland has a real tenderness for her characters. As her readers, you’ll read these stories with a sense of awe, wonder, and enchantment. This is a total literary surprise.