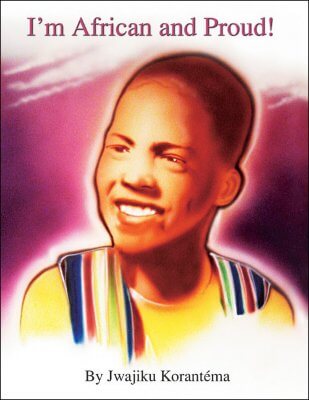 Read a Description of I’m African and Proud

’I've taught in New Jersey schools for 32 years, 21 as a kindergarten teacher. I've seen so many children of African descent who have low self-esteem and’ didn't like themselves: their hair, nose, lips and other features.

Many parents would be surprised to know that some children today still call each other derogatory names, refer to one another as ’nappy-headed,’ or say, ’You black this and you black that,’ equating black with an insult. Some even use the N-word. They still prefer to dolls with long straight hair, because that's what's presented as the beauty standard on billboards and on television.

This book is written primarily with preschool through third grade in mind.

However the messages is for all ages' I want them to know that they are a beautiful people. ’
’Jwajiku Korantema on her inspiration for the book.

In the wake of Don Imus’ dismissal for his racist comments about the Rutgers Women's Basketball Team, it appears that some good has been coming out of the ugly incident. For many responsible leaders have pointed out that the sanctions shouldn’t stop there and that the time has arrived for the black community to purge itself of certain self-destructive elements of African-American culture, beginning with gangsta’ rap lyrics.

A critical aspect of reversing the mindset nvolves instilling a positive sense of self in the very young. With that goal in mind, Jwajiku Korantema has written a timely book entitled ’I'm African and Proud.’ Ms. Korantema, ironically, happens to be a graduate of Rutgers herself which makes this contribution to children's literature all the more significant.

As an educator with over thirty years' experience, most with kindergarteners, she is well aware of the importance that the formative years play in shaping a child. So, her elementary picture book delivers positive messages about African ancestry, features, contributions and potential.

The text's lilting rhymes are accompanied by lush illustrations by a gifted artist named Kenya Lovelace whose soothing airbrushes were created from photos of the author's son, her former students, folks from the community and role models such as Dr. Martin Luther King. A joyous celebration of blackness which ought to make a great bedtime read for impressionable young minds.

Read To Be Determined’s description of I’m African and Proud.