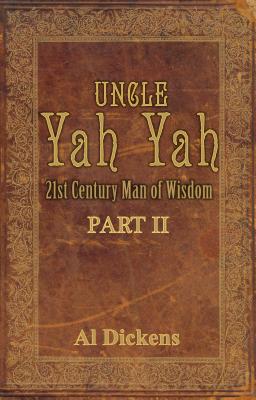 Author Al Dickens gives us his unique brand of wisdom told as by Uncle Yah Yah, a storyteller and wise sage spewing amusing anecdotes, in the form of two books — ‘Uncle Yah Yah: 21st Century Man of Wisdom, Parts I and II’.

Uncle Yah Yah: 21st Century Man of Wisdom  In this day and time mankind can use any of the truths that will manifest a  better person for longevity in life, thus wisdom no matter the era is needed and  requested. Author Al Dickens gave us his unique brand of wisdom told as Uncle  Yah Yah, a man of this age as a storyteller and wise sage spewing amusing  anecdotes, in the form of two books -- ‘Uncle Yah Yah: 21st Century Man of  Wisdom, Parts I and II’. Not just any man, mind you. You may ask what is he  trying to accomplish, and after reading further it’s easy to fathom why inspiration  is the bottom line for good intent. The books first and foremost are simple  maxims on how to embrace faith to improve lives through a value-added belief  system built on conventional wisdom, and the man dispensing it. The author  defines Uncle Yah Yah as a unique person with something to say dispensing  sage advice for the masses. The gist of the books are relative to Uncle Yah Yah’s  ‘manuscripts’ -- simple spiritual guides full of quips, quotes, and other anecdotal  jewels that explains the title character as a bona fide Guru.

Both books are sequential and sub-divided in insightful chapters, giving  narrative input by installing a lead character extracting a storyline on the way to  discovering the intrinsic soul of Uncle Yah Yah. Utilizing a simple method  unlocking the aura that surrounds his persona Mr. Dickens had the wherewithal  to create a preamble to set up components for the books. To wit: the  aforementioned character, Rudy Hawkins, is a reporter for the Essex Weekly  News who starts his journey at Paradise Gardens, a black resort where he  meets, interviews and bonds with the people who knows Uncle Yah Yah  personally. One by one throughout the chapters, each of them relate the essence  of a highly-esteemed man known for clarity, wisdom and understanding. Central  to Parts I and II are opinionated views on society, identity, religion and wisdom  seen through his eyes. The idea is being able to tell short stories using animals,  mostly to show some of the great lessons in life. Each vignette ends with a wise  saying to stimulate the mind. Discover what the ‘The Wise Little Mouse’, ‘The  Hungry Wolves’, ‘The Rabbit and the Squirrel’, and The Raccoon and the Bear’, all  have in common for a higher consciousness linking wisdom with knowledge.  Meeting Uncle Yah Yah and being introduced to what is offered by him is half the  story.

Part II for a sense of continuity, Rudy Hawkins is back as the omniscient-type  persona ready to uncover more of Uncle Yah Yah’s life lessons. Could it be that  he needs more from Uncle Yah Yah? Yep, you guessed right! Where Part One  leaves off, this new installment finds Mr. Hawkins now lamenting about his failed  marriage and on the verge of a nervous breakdown seeking answers and  homilies for sage interpretation. The main course is the new Manuscript that  contains much of the wisdom that Uncle Yah Yah is famous for. Like the first  book, the author divides the book in sections but not before setting the stage for  Rudy to bring closure to his issues as he again braces for Uncle Yah Yah's  subsequent maxims anew. The second section is called WISDOM, which mainly  consists of wise sayings and quite a few deep emanations for quality living. The  coda gives the author the wherewithal to close with a bang as he gives forth The  Thirteen Greatest Rules.

For the most part I enjoyed the book, and felt that the author accomplishes his  goal of allowing one to think outside of their comfort zones. Moreover, there’s  worth in seeing ourselves relative to what can be discerned from deductive  reasoning and logic. My enjoyment reading both books found me looking beyond  status quo. Though simple and basic in its approach, could the production have  benefited from a better packaged presentation where a certain sense of  sophistication would give readers reason to pick up this book based on the title?  For whatever reason, the author failed to include a customary index and included  the same preambles at the beginning of the book, i.e., reader Praises,  Introduction, Acknowledgments, Foreword, and Editor’s Note as the first book,  but beyond that, no need to worry. There’s a decided difference to a certain  extent on presentation, but nothing is taken away from the book as a whole. You  will have to be the judge on that. One of the benefits of this whole subjective  matter however, is the fact that readers need not to have read Part I in order to  understand and appreciate Part II. The wise sayings have validity and should  give most readers a chance to get something out of it. We, at anytime in our  growth should have such wit, words and wisdom for a highly recommended read.  I recommend Parts I and II of Uncle Yah Yah’s brand of reasoning and reality!