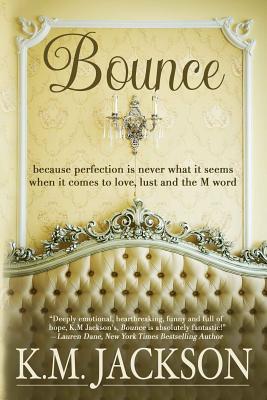 Read a Description of Bounce

It's All About The Trust!

Author K.M. Jackson has a real winner in Bounce, a combination contemporary women's fiction/romance novel that is both entertaining and deeply emotional. The storyline of maritial infidelity, is nothing new but this book takes it a bit further in exposing the most intimate details of a woman's heart when her husband admits to having cheated on her with a co-worker, a younger bouncy white girl with a “bimbo-like” persona.

Sabrina and Sean Jacobs seem to have it all, the total package. Sean is a former NFL player, now a commentator on a successful sports talk show. Sabrina is a financial consultant for a top New York financial services firm just about to make partner. They are living the lush suburban life with two beautiful children, Zach and Mackenzie and a dedicated nanny. They have it all together, a picture perfect life.

What went wrong? Seen through the eyes of Sabrina, this wronged wife just can not seem to believe that her life has become a character in chick flick film. Rage is her first reaction as she throws Sean out of their home with a quickness. Now what comes next?

I just loved this book. The way the author wrote the characters was top-notch. Sabrina was so transparent, expressing the raw emotions of a woman done wrong. Sean was the ever “so sorry, let's fix this” husband who realizes a bit too late that he had made the worse mistake of his life. Jackson is an excellent writer. Her dialogue was so genuine. And the character that she created in Sabrina kept me engaged in the read.

Although the plotting was off a bit in the beginning, it did pick up as the book progressed. Sabrina got on my nerves at that point. Nothing Sean did or wanted to do, helped the situation. It seemed like she was just going to whine throughout the rest of the story. I am so glad that she didn't.

The secondary characters were memorable also; both kids, were smart, sassy and in love with their father. The dance classes, the soccer games and the French lessons, all of the trappings of a good African American upbringing that Sabrina and Sean were determined to give them made them expect the best. As a father; Sean never let them down while fighting for his family.

I also liked her relationship with her sister, the opposite of Sabrina who was not as trusting in her personal life after a bad marriage. She thought that Sabrina should cut her losses and move on. They had both grown up fatherless with their mother and had worked hard to create the lives that they were living, far from their Harlem roots.

At one point, I thought that Sean would just give up because Sabrina was so caught up in her pain that she found it hard to find her way to forgiveness. She kept flip-flopping. One day wanting him back, the next day not being able to believe in his promises. It was the trust that was lost that was paramount and Sean didn't seem to get it.

I also enjoyed how the author crafted the Sabrina who was surrounded by white privilege in her work space and in her neighborhood. Many of the women in her community made her feel that she did not fit in. She came to understand that her priorities were different than those of these women. I was so proud of Sabrina. She learned so much about herself as an African American woman in her journey to be whole, as a woman and as a mother. Bounce was a great read. I highly recommend this book.