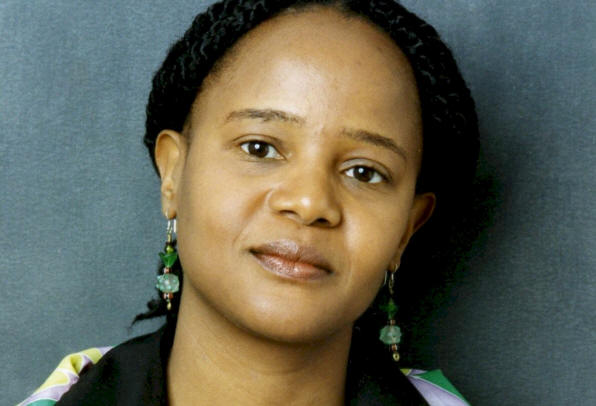 Edwidge Danticat was born in Haiti in 1969 and moved to the United States when she was twelve. She is the author of two novels, two collections of stories, two books for young adults, and two nonfiction books, one of which, Brother, I'm Dying, was a finalist for the National Book Award and winner of the National Book Critics Circle Award for autobiography. In 2009, she received a MacArthur Genius Fellowship.

In the interview below, Edwidge talks with AALBC.com’s Kam WIlliams about her opus, Create Dangerously, a collection of essays based on a series of lectures she delivered at Princeton University last year.

Kam Williams: Hi, Edwidge, thanks for the time.

Edwidge Danticat: I hope you don’t mind that I have my baby daughter with me. Usually, I make some sort of arrangements.

KW: No need to apologize. I once interviewed Soledad O’Brien while she was surrounded by her kids in the kitchen, and the children’s distractions only added to the experience. First, let me say I enjoyed Create Dangerously immensely. When did you arrive at an understanding that your aesthetic coincided with that of Albert Camus in his essay of the same name which served as the inspiration for your book’s title?

ED: [Laughs] You ask that question in such a very, very serious way. I’ve always enjoyed the work of Camus, and found it very thought-provoking, especially his novels. But less universally read are his essays which are very beautiful. I read that one when I was in college and starting to think seriously about writing. He always seemed to express more ambivalence than certainty. That’s certainly how I feel, that this is all a kind of quest, and that things change in terms of what you’re trying to accomplish as you go along. I like the fact that he talks about both sides and the ambivalence of artists.

KW: FSU grad Laz Lyles says: I heard a New Yorker Magazine podcast that mentioned you and Junot Diaz in tandem as the frontrunner "immigrant" writers. I'd like to know if there are any other writers we should be looking out for who are creating and writing in this tradition.

ED: [Laughs] I don’t know if it’s true that we’re at the forefront. I think we are just part of a big and emerging group. Two of the people I‘m most actively reading right now are Dinaw Mengestu and Jhumpa Lahiri. Also, Tiphanie Yanique who wrote an absolutely amazing novella and collection of short stories called “How to Escape from a Leper Colony.”

KW: Rudy Lewis says: I have read several of your books and think that you are the finest and most courageous writer living today, on par with the late South African poet Dennis Brutus. Do you think it a waste of energy to protest for the return of President Aristide to Haiti when it is almost certain that the United States, Canada, and France will not allow his return?

ED: Rudy is right that it would be very difficult for Aristide to return as a leader because the larger powers won’t allow it, but I don’t think the people in Haiti who support his return would consider it a waste of energy because he is a citizen of Haiti.

KW: Rudy also says: South Africa was a cause cél bre. Why do you think that Haiti has not risen to that level in the African-American political imagination, in their churches and other social and political arenas? Is it the problem of language or some other factors?

ED: There has long been an ideological and intellectual engagement with Haiti as the first black republic by people like Harry Belafonte, Danny Glover, Randall Robinson, Zora Neale Hurston, Langston Hughes, Katherine Dunham, Frederick Douglass and Ntozake Shange. And since the earthquake, we’ve witnessed a very visceral reaction and a new wave of engagement on the part of many African-American communities all across the country.

ED: There are two. Haitian Women for Haitian Refugees has been on the ground since the beginning. The majority of Haitian households are female-headed because of politics and migration. The other is the Lambi Fund of Haiti.  Both work primarily in areas outside of Port-au-Prince which get less aid.

KW: Rene also wants to know whether you have any political aspirations in Haiti, ala Wyclef Jean?

KW: Harriet Pakula Teweles says: First of all, I want to say how very much I appreciated "The Dew Breaker.” How has winning a MacArthur Award and being dubbed a genius affected your writing process?

ED: It hasn’t made it easier, strangely enough. [Chuckles] Writing is the same, no matter what else happened with your previous book, because ultimately you have to sit down with a blank page and wrestle with an idea. It hasn’t changed that process in terms of the anxiety. Once you’re involved in the work, it’s really just you and the characters and the words. What does change is that the more you do it, the more practice you have, the less stressful writing is. You know how that is, Kam

KW: Yeah. What did being named an Oprah Book Club selection do for you?

ED: It gave me a lot of time. What it did was allow me the time to concentrate on writing so I did not have to do so many other jobs. The greatest gift anyone can give to a writer is time, as you very well know.

KW: Attorney Bernadette Beekman says: I am always so incredibly moved by your writing, especially “Krik Krak,” “The Farming of the Bones” and “The Dew Breaker.” I see that your new work is once again about life's challenges respecting immigrants. I wonder if one day you will write an extended work which will examine happiness instead of suffering.

ED: [Laughs] I think I’m just melancholy by nature, and a lot of that gets into my writing. But on a practical level, I think it’s hard to write a book about happiness because fiction requires tension and complication.

KW: Bernadette asks: When was the last time you were in Haiti?

ED: I was there towards the end of the summer to visit family and to work at a camp called “Li Li Li” which means “Read Read Read.”

KW: Yale grad Tommy Russell asks: Were you surprised at the outpouring of support after the earthquake? Are things getting better? And what more needs to be done down there?

ED: I was surprised at how broad the recovery was. Every one was doing something. On another level, I probably shouldn’t have been surprised because there is something human about the way people react to and identify with suffering. There’s a lot more empathy in the world than we perhaps realize. The response to the earthquake proved that. Unfortunately, many of the donations haven’t been used, and we still have a million and a half people homeless, plus the recent cholera outbreak shows the vulnerability of the situation. So, I think there needs to be a renewed urgency.

KW: Marcia Evans is a person who grew up in the Cambria Heights section of New York City. She asks: Why is this lovely neighborhood never discussed by the media when covering the Haitian community?

ED: Marcia’s right about that, although since the earthquake there’s a reporter from The New York Times, Anne Barnard, who’s been writing a very extensive series about that particular community in Queens. I think it’s hard for an outsider to capture the flavor of a community and all its nuances, so ultimately Haitian-Americans need to start sharing intimate accounts of their stories. But, Marcia’s right, there are many wonderful stories waiting to be told. We also have to support Haitian-American media, like Heritage Konpa and The Haitian Times, because they not only link Haitian communities to each other, but they are the portals from the Haitian community to the greater community.

ED: Yes, I’ve been afraid a few times, especially now that I have kids. I’m more afraid for them than for myself.

ED: Yes, most of the time. [Chuckles]

KW: What is your guiltiest pleasure?

ED: Dinaw Mengestu’s new book, “How to Read the Air.”

KW: The music maven Heather Covington question: What are you listening to on your iPod?

ED: A true rebuilding of Haiti.

ED: My mother cooking. I think I was about two years-old.

KW: The Nancy Lovell Question: Why do you love doing what you do?

KW: The Flex Alexander question: How do you get through the tough times?

ED: By praying and reading.

KW: The Rudy Lewis question: Who’s at the top of your hero list?

KW: What has been the biggest obstacle you have had to overcome?

ED: That’s a tricky one.

KW: The Tavis Smiley questions. First, how introspective are you?

ED: You know I have to be very introspective to do the work that I do, so I’ll say quite a bit. [LOL]

KW: Finally, how do you want to be remembered? What do you want your legacy to be, and where are you in relation to that at this point in your life?

ED: [Laughs] That’s funny, because that was also Tavis’ last question when I was on his show recently. I have young daughters, and I want my legacy to be more connected to them. I hope to be a good role model for my daughters. I’m only at the beginning of the process, because they’re young.

KW: Thanks again, Edwidge, and best of luck with the book.

ED: Thank you, Kam. It was a lot of fun talking to you.