Southside With You
Film Reviewed by Kam Williams

Who would ever think of making a movie just about Barack (Parker Sawyers) and Michelle Obama’s (Tika Sumpter) first date? Richard Tanne would, that’s who, and he makes an impressive directorial debut with this inspirational biopic chronicling a very eventful day in the lives of the future President and First Lady.

The story unfolds in Chicago during the summer of 1989 when Michelle was already employed as an attorney and living back home with her parents (Vanessa Bell Calloway and Phillip Edwad Van Lear). Barack had just finished his first year at Harvard law school and had landed an internship as her assistant at her prestigious, white-shoe firm.

Apparently, he was so instantly smitten with Michelle that he could barely contain himself. So, she had to politely remind him of the the office’s strict rule against fraternizing among associates. Nevertheless, when she refused to consider a romantic rendezvous, he pitched her on the idea of attending a business meeting with him.

Once Michelle grudgingly agrees, Barack arrives late, yet is too cocky to be embarrassed about either his tardiness or the gaping hole in the floor of his rusty jalopy. What the skeptical object of his affection doesn’t know is that he has added a picnic, a museum and a movie to their planned itinerary.

Again, Michelle balks, but consents only after reminding her self-assured suitor that “This is not a date.” Nevertheless, the smooth-talking chain smoker presses on with his own agenda, with the Art Institute of Chicago being their first port-of-call. And while perusing paintings by the legendary Ernie Barnes, Barack began broaching personal subjects. 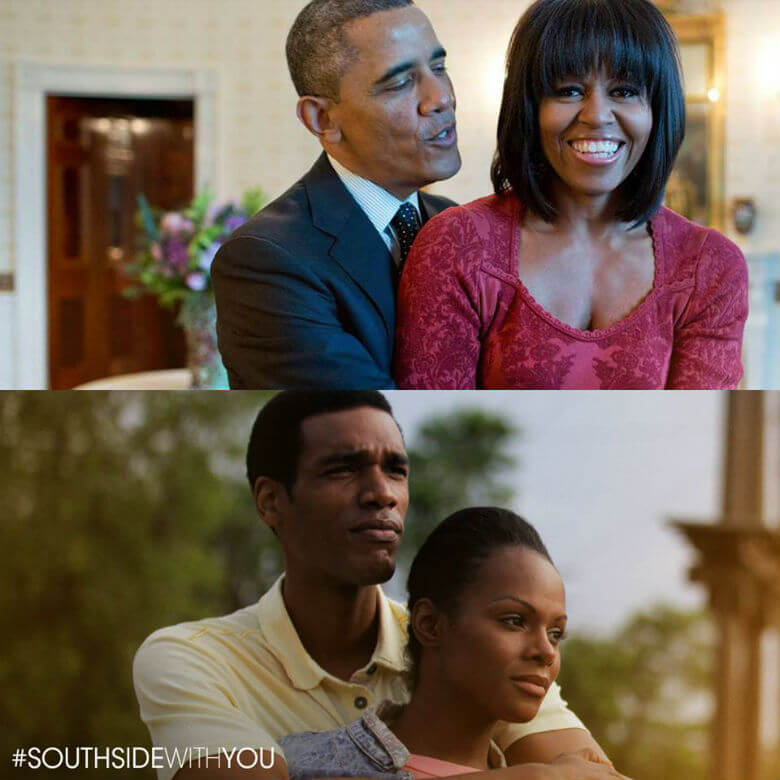 The two continued to get to know each other over sandwiches in the park, with the discussion touching on everything from family to faith to blackness to the meaning of life. So, Michelle had a decent measure of the man by the time they headed to the South Side rec center where Barack had once worked as a community organizer.

The icing on the cake proves to be an inspirational speech that’s nothing short of presidential which he delivers there to the discouraged denizens of the crumbling ’hood. Michelle’s floodgates finally open, undoubtedly helped along by one woman’s (Deanna Reed Foster) approval of her as the first sister she’s ever seen Barack with. Next thing you know, the two lovebirds head to the theater to see Spike Lee’s Do the Right Thing, before capping off the evening with a little canoodling while sharing an ice cream cone.

Southside With You is a syrupy soap opera readily recommended for ardent Obama admirers. The predictable love story has a tendency to telegraph its punches, since its familiar plotline sticks to what’s already public knowledge. Overall, this plausible account of the blossoming of love between Barack and Michelle serves up a pleasant, if sanitized version of their romantic launch en route to an historic rendezvous with destiny!