Documentary Discusses Influence of Fraternities on Founding Fathers and Beyond 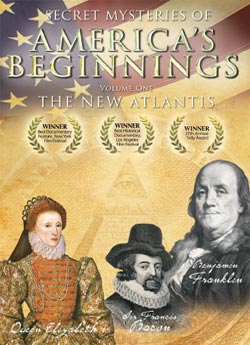 During the previous Presidential election, did you ever stop to consider whether it was by mere coincidence or by some sinister design that both candidates in happened to belong to Skull and Bones, a fraternity restricted to the very well-connected which strictly swears its members to secrecy?

Does that suggest that certain interests of the rich and powerful people would be served, regardless of whether Bush or Kerry prevailed?

Why is the Washington Monument in the shape of an obelisk, a pagan icon?

Have you ever closely examined the back of the dollar bill, and wondered why it contains a pyramid topped by an eye over the inscription ’Novus Ordo Seclorum,’ which is Latin for ’The New Secular Order.’ Did you know that the same phrase was emblazoned on the original Great Seal of the United States in 1782?

These are the sort of questions addressed in Secret Mysteries of America’s Beginnings (Volume One), a muckraking DVD which reveals the influences exerted by the Masons, Rosicrucians and other cults on early European explorers like Sir Francis Drake and Christopher Columbus. In a docu-dramatic style similar to a typical History Channel production, this incriminating expose’ makes the case that pagan beliefs have played perhaps a more significant role than Christianity in the creation and continuing control of this country.

The only flaw in a film of this nature is that it devotes more time to insinuating the existence of sub rosa, shadow societies but stops short of proving any actual misdeeds on the part of any power brokers, expecting the audience to connect those dots on its own. Thus, Secret Mysteries of America’s Beginnings is likely to appeal most to the paranoid conspiracy theorists who enjoy speculating about whether the Warren Commission Report (on the Kennedy assassination) and the 9-11 Commission Report (on the 2001 terrorist attacks) Report might have been bi-partisan cover-ups.