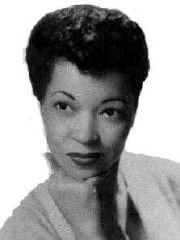 Ormes’ strips depicted black in a very different fashion which was not the norm of her day.  Typically blacks were shown as servants or exaggerated caricatures of the “Buckwheat” or “Steppin Fetchit” variety.  In fact, Ormes female characters were independent and strong.  Ormes said “I have never liked dreamy little women who can’t hold their own”

Today, there are very few syndicated cartoons drawn by black women (see Barbara Brandon).  In this light Ormes’ accomplishments during the 1940’s and 50’s are quite remarkable.

“During the segregated years of the 1900’s through 1960’s America, the Black Press offered comic strips that featured African American heroes & heroines in a wide variety of life situations. These characters were not confined to gritty ‘inner-city’ stories, poor ‘ghetto’ life or as one dimensional comic relief as today.”

In the United States at midcentury’a time of few opportunities for women in general and even fewer for African American women’Jackie Ormes (1911-85) blazed a trail as a popular cartoonist with the major black newspapers of the day. Jackie Ormes chronicles the life of this multiply talented, fascinating woman.

Ormes’s cartoon characters (including Torchy Brown, Candy, Patty-Jo, and Ginger) delighted readers of newspapers such as the Pittsburgh Courier and Chicago Defender and spawned other products, including an elegant black doll with a stylish wardrobe and "Torchy Togs" paper dolls in the funny papers. Ormes was a member of Chicago’s black elite, with a social circle that included the leading political figures and entertainers of the day. Her politics, which fell decidedly to the left and were apparent to even a casual reader of her cartoons and comic strips, eventually led to her investigation by the FBI during the McCarthy era.

The biography’s more than 150 illustrations include photographs of Jackie Ormes and a large sampling of her cartoons and color comic strips, including some furnished by cartoonist and cartoon historian Tim Jackson. Her work provides an invaluable glimpse into American culture and history, with topics that include racial segregation, U.S. foreign policy, educational equality, the atom bomb, and environmental pollution, among other pressing issues of the times—and of today’s world as well.

Nancy Goldstein became fascinated with the story of Jackie Ormes while doing research on the Patty-Jo doll. She has published a number of articles on the history of dolls in the classical world and the United States.