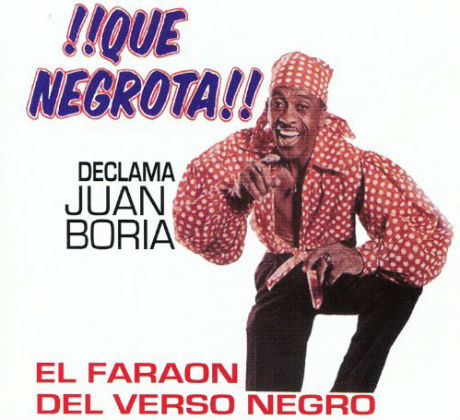 Jaime Torres Torres, best known as Juan Boria, was born in Dorado, Puerto Rico on February 17, 1906. His parents were Dona Anselma Romero and Don Juan, who lived to 99 and 108 years of age respectively. Boria is known as the “Negro Verse Pharaoh.” Despite his very humble origin, Boria managed to obtain a University degree through many great sacrifices. He worked as a mason and carpenter in order to pay for school. He attended the University of Puerto Rico in Rio Piedras where he received his Bachelor’s degree as a teacher of industrial arts, drawing and carpentry. A profession he held for 37 years. Boria began teaching at a school in San German follow by a school in Canovanas which is where he heard his colleague Pablito Rovera, recite a Negro poem. It’s where his interest to be a poet started; he loved the poem so much that he memorized it and would recited to his friends. Boria got discovered in a program that his friends made him participate, the WKAQ radio station. Fortunato Vizcarraondo, the most important Negro poet at the time heard him and offered him additional poems for him to recite at the program. He later met Ramon Rivero also known as “Diplo” an important show business men that made Boria part of his group called La Farandula Bohemia where he performed as a poet and actor.

He traveled all around Cuba, Dominican Republic, Colombia, Spain, and New York with the recommendation of “Diplo” and Luis Pales Matos. After a great deal of traveling he took off and went back to teaching in Puerto Rico. Going back to teaching didn’t stop him from debuting in the television show Tribuna del Arte and La Taberna India in Telemundo. In the year of 1995, he debuted in a Mexican/Puerto Rican film Mientras Puerto Rico de duerma which was directed by Julian Soler. He dedicated part of his life traveling several cultural centers, schools, and public squares around Puerto Rico where he recited at events supported by the Puerto Rico’s Institute. He appeared in many short films made by the Division of Community Education and was part of the Cultural Olympics. In Boris’s hometown the 7th Festival of Bomba y Plena was celebrated dedicated to him in the year 1980, follow by Nuestra Noche (Our night) the same year was held in his honor in one of the largest arena’s in Puerto Rico, the Roberto Clemente Coliseum. The theater Juana de Arco located at the entrance of Dorado, Puerto Rico was renamed in his honor the Juan Boria Theater by the mayor Alfonso Lopez Chaar after being renovated. Boria presented his first show at the theater on November 1, 1984.

Boria was married to Emerita Rodriguez, they had two daughter’s named Norma and Zayda. Today they are an accountant and neurologist, respectively. After his retirement from Magisterium in 1974, he established a book binding workshop in his own home in Cupey, Rio Piedras. He is credited for being responsible for the popularization of Negro poetry in Puerto Rico, but also an interpreter of high level in all Hispanic America. Boria died at the age of 89 on May 29, 1995 in Rio Piedras, Puerto Rico.