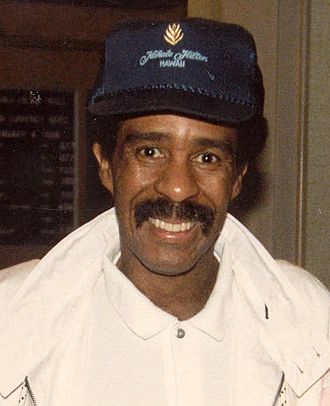 Before he was doubling over audience members with profanity-laced sketches and stories, thus igniting a comic revolution, Richard Pryor was a young joke man struggling with his identity. In the late 1960s and early 1970s Pryor transformed himself from a no threatening, middlebrow comic to a controversial, X-rated sensation, and in turn forever transformed the landscape of comedy in the process.

For the first time, those contrasting worlds have been brought together on the two-CD EVOLUTION/REVOLUTION: THE EARLY YEARS (1966-1974), available February 1, 2005. Compiled and produced by Reggie Collins and Steve Pokorny, EVOLUTION/REVOLUTION collects 65 tracks that chronicle the metamorphosis that predated Pryor’s 1974 breakthrough album, That Nigger’s Crazy. Only one track on this collection is available on Rhino’s previous Pryor releases, 2002’s The Anthology: 1968-1992 and 2000’s …And It’s Deep Too! The Complete Warner Bros. Recordings (1968-1992), a Grammy-winning, nine-CD boxed set, both of which were also produced by Collins and Pokorny.

Disc 1 (titled Evolution (1966-1968)) spotlights the comedian’s mostly PG-13 beginnings and features restored versions of several tracks that originally appeared on various titles issued on the Laff label. By contrast, Disc 2, Revolution (1971-1974), is a collection of fearless, no-holds-barred performances that finds the groundbreaking comic finally coming into his own after a break in public appearances, and includes the seminal 1971 Laff album "Craps" (After Hours), plus previously unreleased recordings from the Pryor, Stax, and Warner Bros. vaults. (A highlight is ten minutes’ worth of hilarity Richard recorded for the acclaimed 1973 film Wattstax, most of which is heard on this collection for the first time.)

Until now, most of the material contained on Disc 1 was strewn across a dizzying array of poorly mastered and crudely edited low-budget albums. But after Richard and his wife, Jennifer Lee Pryor, won the legal rights to the comic’s Laff recordings in 2002, the road to EVOLUTION/REVOLUTION was paved.

In early 2004 Jennifer gave Rhino access to some 40 hours’ worth of raw, unedited, pristine-sounding reel-to-reel tapes of stand-up gigs recorded during the mid- to late ’60s, which were stored at the comedian’s house. These tapes contained much of the same material from which most of the Laff albums were gleaned. The best of those performances appear on Disc 1, which finds a 25-year-old Pryor delivering a gay Batman and a "Japanese mime" during "Improv, Pt. 1," and, two years later, uncannily re-creating all the roles of a play he appeared in as a child on one of his most beloved early bits, "Rumpelstiltskin." "Hippy Dippys" and "Hank’s Place" hint at the direction Pryor’s new brand of comedy was beginning to take, featuring dead-on character sketches of the streetwise dregs of society who populated the Peoria ghetto of his youth. And who can forget the classic "Prison Play" (aka "Black Ben The Blacksmith"), in which Richard mercilessly spoofs the absurdity of racial bigotry and its resulting social and sexual taboos?

In 1969 and 1970 Pryor took a hiatus from the stage, moved to Berkeley, California, and immersed himself in the counterculture. In 1971 he returned with a vengeance, unleashing his new profane-but-profound comedic voice on the underground classic "Craps" (After Hours), released by Laff. Disc 2 of EVOLUTION/REVOLUTION features that album in its entirety, and is rounded out by, for the most part, previously unreleased tracks recorded from 1971-1973, including an alternate version of "Super Nigger" (an outtake originally recorded for use in the film Wattstax) and an early version of "Wino & Junkie" (recorded a full three years before he recut and revamped it for the album That Nigger’s Crazy). The set concludes with a rare, revealing 1974 interview conducted by then-Rolling Stone scribe David Felton, who also wrote the liner notes for this collection.

In essence, on EVOLUTION/REVOLUTION you’ll clearly hear the preeminent comic genius of our time laying the groundwork for the future of stand-up comedy as he simultaneously changes the rules and raises the bar. Just ask Robin Williams and Whoopi Goldberg and Roseanne and Eddie Murphy and the Wayans brothers and Margaret Cho and Chris Rock and Wanda Sykes and Bernie Mac and Dave Chappelle and… well, you get the idea.

Pryor himself applauds the new compilation: "I’d like to thank my wife, Jenny, and Rhino Records for finally getting it right, and putting out my early shit the way it was meant to be heard ’ and for digging up some good unreleased stuff that even I’d forgotten about!"
’ from a Rhino press release, ’ 2004 Rhino Entertainment

PRYOR CONVICTIONS : And Other Life Sentences
Click to order via Amazon

Pryor Convictions is the autobiography of the most influential comic performer of the past thirty years. Richard Pryor takes us from his childhood and adolescence in the whorehouses, bars, and pool halls of the black section of Peoria, Illinois, through his army service, peripatetic life as a burgeoning comic, ascendance as the most powerful and honest comedian of the 1970s and early 1980s, to the tragic unraveling of his career and diagnosis of multiple sclerosis.

Jokes My Father Never Taught Me: Life, Love, and Loss with Richard Pryor
Click to order via Amazon

By Rain Pryor With Cathy Crimmins

The loving yet brutally honest memoir of the daughter of comedy legend Richard Pryor.
Rain Pryor was born in the idealistic, free-love 1960s. Her mother was a Jewish go-go dancer who wanted a tribe of rainbow children, and her father was Richard Pryor, perhaps the most compelling and brilliant comedian of his era.

In this intimate, harrowing, and often hilarious memoir, Rain talks about her divided heritage, and about the forces that shaped her wildly schizophrenic childhood. In her father’s house, she bonded with Richard’s grandmother, Mamma, a one-time whorehouse madam who never tired of reminding Rain that she was black. In her mother’s house, and in the home of her Jewish grandparents, Rain was a "mocha-colored Jewish princess," learning how to cook everything from kugel to beef brisket.

It seemed as if Rain was blessed with the best of both worlds, but it didn’t quite work out that way. Life at Mom’s was unstable in the extreme, while at Richard’s place Rain was exposed to sex and drugs before she had even learned to read. "Daddy," she told her father one day, sitting down to Thanksgiving dinner at the advanced age of eight, "the whores need to be paid."

Jokes My Father Never Taught Me is both lovingly told and painfully frank: the story of a girl who grew up adoring her father even as she feared him—and feared for him—as his drug problems grew worse. In 1980 Pryor tried to kill himself by setting himself on fire, then joked that it had been an accident: "No one ever told me you couldn’t mix cookies with two types of milk!" In his later years, Pryor succumbed to multiple sclerosis, and Rain watched in tears as her father became a shell of his former self. Once, in an unusually introspective mood, Pryor asked his daughter, "Why do you love me, Rainy, when I can be so mean?"

Jokes My Father Never Taught Me answers that poignant question and many more. It is an unprecedented look at the life of a legend of comedy, told by a daughter who both understood the genius and knew the tortured man within.

PRYOR CONVICTIONS : And Other Life Sentences
Click to order via Amazon

Richard Pryor’s life story is one of the most controversial and shocking of any performer in American history. Raised in the bars and whorehouses of Peoria, where he gained first-hand knowledge of racism and hypocrisy, he toiled for years as a bland Cosby clone before finding his true voice as one of America’s most brilliant comedians ’ and one of its most profound, and profane, social critics. At the apex of his career ’ one of Hollywood’s biggest stars, and one of the most influential black men in the world ’ it all came tumbling down in a maelstrom of drugs, multiple marriages, heart attacks, violence, and suicide attempts, finally ending in a notorious incident where he lit himself on fire while freebasing cocaine. Pryor Convictions tells the uncensored story of the man behind the myth. Written in Pryor’s own words, this human and compelling account is like the man himself: raw, funny, fearless, and completely unforgettable.

Richard Pryor: I’m doing this stand-up on the show because the people at NBC said that well America don’t know who you are and you come out and they’re scared. They just see black people and they get nervous if they don’t know who they are.

[as a TV preacher] Richard Pryor: People are always asking me, "Reverend; if you need money so bad, why don’t you sell one of your houses, or cars or get rid of some of that jewelry?" And I always reply, "Are you crazy!"

[looks at the phone bank] Richard Pryor: How much money have we raised so far? None! OK, this is a message for all you white people out there. Part of the money we raise tonight will go to the Back to Africa movement and…
[every phone rings]

One of the most talked-about comedy shows ever, this hilarious collection of classic laughs became a legend during its showings on NBC and now returns on DVD for a new generation! Guests include John Belushi and Maya Angelou, Cast Members include Robin Williams (Good Will Hunting, Dead Poets Society), Sandra Bernhard (Without You I’m Nothing), Shirley Hemphill (What’s Happening!!), Paul Mooney (Hollywood Shuffle), LaWanda Page (Sanford and Son), Tim Reid (WKRP in Cincinnati), Edie McClurg (Ferris Bueller’s Day Off) and Marsha Warfield (Night Court) and Peter Cullen (The Tigger Movie).

Which Way Is Up
Click to order via Amazon

Plot Synopsis: Richard Pryor is playing three different roles here. The first being a poor orange picker named Leroy who gets laid off when by mistake he joins the worker’s union during one of their demonstrations. Afterwards he leaves his wife and family behind which also includes Leroy’s father (also played by Pryor) to go to Los Angeles. He ends up working for the same company that fired him back home. He is a manager at the company but he is now distant from his former pals. He meets and falls in love with Vanetta who is a labor organizer which leaves him splitting time between his wife back home and Vanetta. Leroy finds out that Reverend Lennox Thomas (also played by Pryor) has got his wife pregnant while he was away in California. Leroy then make the moves on the reverend’s wife. Remake of: The Seduction of Mimi

Live on the Sunset Strip (1982)
Click to order via Amazon

Plot Synopsis: One of comedian Richard Pryor’s live performances (at the Sunset Strip, obviously) caught on film. Pryor talks about most of his standard subjects, including rascism and the differences between blacks and whites, along with talking about some of his recent film roles.

Richard Pryor: There are two billion chinese people livin’ in China. That’s how you know someone’s doing some serious f***ing…