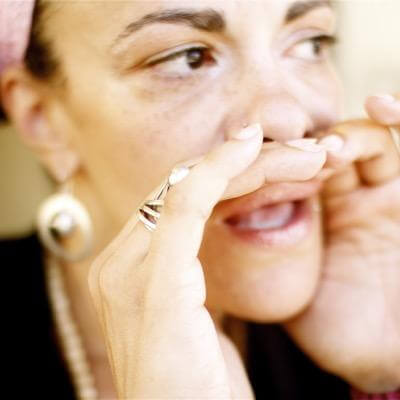 Ursula Rucker is one of the premiere spoken word recording artists in the music industry today. As a poet and performance artist, Ursula has enchanted critics and fans across the globe with her diverse repertoire, captivating vocals and accessible poetic verse.

Since 1994, Ursula has shared her songwriting talent and mesmerizing voice with an array of recording artists and producers including King Britt, 4 Hero, Jamaaladeen Tacuma, Josh Wink and The Roots. Each was drawn to the soft spoken eloquence and undeterred honesty which have become Ursula’s signature.

Photo courtesy XXL Magazine, August 1999
Photographer: Benoit Peverell
Born and raised in Philadelphia, Ursula began documenting her observations of the world when she was just a girl. A graduate of Temple University’s journalism program, she kept her creative writing as a prized, personal possession until she was prepared to share her gift with the world. In 1994, Ursula introduced an open-mic night audience at Philadelphia’s Zanzibar Blue to the beauty and urgency of her poetry.

Word quickly spread throughout the city of Ursula’s poetry and stage performance, which has been described as "strong, vulnerable, wounded and raging." Producer King Britt was quick to recognize Ursula’s talent and invited her to create her first spoken word recording, the 1994 club classic, Supernatural (Ovum/Slip N Slide UK).

Dance music fans and spin doctors were quickly enamored with Ursula’s mystical vocals. According to Britt, while the original and remixes of Supernatural were celebrated in clubs all over the globe, the most popular version remains the acapella.

Critics were quick to compare Ursula to celebrated writers like Sonia Sanchez and Nikki Giovanni. Coincidentally, when Ntozake Shange was unable to provide The Roots with a spoken word contribution for their debut album do you want more?!!?!! (Geffen, 1994), they called on Ursula to fit the bill.  The Unlocking, which closed do you want more?!!?!!, introduced Ursula to the world of progressive hip-hop and led to subsequent invitations to close The Roots follow-up albums iladelph halflife (Geffen, 1996) and the certified gold record things fall apart (MCA, 1999).

The alluring poetic tales Ursula created for The Roots contain subject matter that was motivated by genuine concern and heightened consciousness. Whether exploring sexual exploitation as in The Unlocking or introducing the lifestyle of a crack-dealing single mother in Adventures in Wonderland, Ursula provided listeners with an intimate glimpse of urban reality.  Ursula has been described as part of a growing movement that is slowly adapting its aural sensibilities to women, particularly in the hip-hop and urban music divisions. Counteracting male artists who casually linger on tales of black whoredom, Ursula plays an essential role in the rise of a new crop of female recording artists who deliver strong, intelligent, and visionary feminine flavor.

In countless reviews, many critics cite the value of Ursula’s work with The Roots, 4 HERO and others. The onslaught of press inquiries resulted in nods, features and demands for more of her work, in URB, VIBE, XXL, Panache, Philadelphia Inquirer, and Straight No Chaser. To date, Ursula has performed her work at an array of venues, universities and festivals including the Montreax Jazz Festival, the 1999 Winter Music Conference, the Theater of the Living Arts, the Painted Bride Arts Center, and Drexel University. Ursula has toured with Jamaaladeen Tacuma, SYLK130, and 4 HERO in the United States and Europe.

Ursula is pleasantly surprised by the reception her spoken word recordings and live performances have received. With inquiries for live performances throughout the United States and Europe, Ursula is looking forward to presenting her work, with original accompaniment by DJ/Producer Robert Yancey III, during the summer of 1999.

Ursula’s upcoming releases include the mermaid-fantasy driven Circe for Guidance Recordings’ spoken word compilation Urban Renewal and the haunting single Soon for Unbound, a benefit album for Mumia Abu Jamal. Additionally, the highly anticipated re-release of Supernatural will be dropped in the UK on Slip N’ Slide in the near future. In September, Ursula will settle into recording sessions for her first solo album on Ovum Recordings (Sony/Columbia).

Muffled sound of fist on flesh

You ain’t nothing but white trash, bitch!

With each hit, each kick, each…broken rib

And as if all that wasn’t enough

As…Daddy grunts and cursed drunk nothings in her bloodied ear

Mommy almost bled to death when she have him…finally

From being daily beat

And Friday nights were the worse and…

Instead he spent hours at some corner spot

Putting his thing down

To hell with the good news that…

He was a father for the first time

His thirst for wine and women

No warm welcome for mother and son

Made a fresh bed

And never made a sound

As she purged her scourge

With birth-blood and quiet tears

Watching as her fears and love and sacrifice

Lie there in his soft skin and new life

One boy soon after

The girl much later and…

Although they were both sung the same lullabies of hate

Her…First Son, the first one

With Stewie, Rezzie, and Little Brother

’Till his heart start to wither

In pain and shame

Blamed Mom for the wrong she let Daddy do to her

Let…sins of the Father cause his Innocence to wander

Found out amongst thieves

Chose to squander his dreams

Stopped believing in himself

Become prodigal with his life

Replaced them with absurdities of others

Who had also lost their way

Espouse no causes but his own

Couldn’t shield her ears from…

His only defense-served be confidence

Phones called cops on block frequent for his shenanigans

Now…Daddy and him twins in addiction

Driven to false-hearted heavens and friends

Had become what he despised from Conception ’til End

Destined for a demise

Womanizing…only for money, never for sex

Bullet in chest, baseball bat to the head

So, eyes wide and glassy

And mouth corners one December 24th

Shots were fired by the gray man

But not shaky enough to miss…

Death was the cause of…

To Mommy’s sobs and shakes

All past, omitted, and absolved by lost

As they clung to each other