“Black Literature is for Everyone” —Troy Johnson 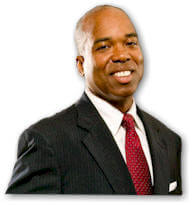 Troy D. Johnson is the founder and webmaster of AALBC.com (the African American Literature Book Club).  Launched in March of 1998, AALBC.com is now the oldest, largest, and most frequently visited website dedicated to books by or about people of African descent.

In addition, to his entrepreneurial ventures, Mr. Johnson has over 20 years of corporate experience, in roles ranging from designing wide area networks to managing international projects for companies including Goldman Sachs. As an educator, Johnson teaches web design at Baruch College’s Zicklin School of Business.

Mr. Johnson holds BS and MS degrees in engineering and an MBA from New York University’s Stern School of Business. He has two adult daughters and lives in Tampa, FL.

A longer biography and information on speaking engagements and events

Black New Yorkers: Booklover hopes to profit from his passion 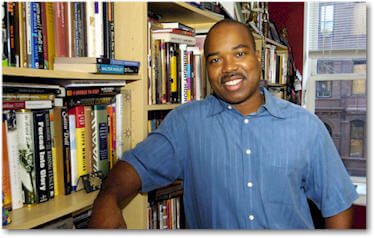 When Harlemite Troy Johnson launched a website dedicated to Black books nearly eight years ago, it came out of "a passion for Black people," he said.

Today, Johnson’s African American Literary Book Club (aalbc.com) is a virtual watering hole for Black booklovers and has been called the most popular website dedicated to African-American literature.

"It’s probably a statement of fact," the 44-year-old originator of the site that reviews books, hosts discussions, profiles authors and promotes book events, in addition to other services for the Black literary world said casually.

Sitting down with the AmNews in his study, Johnson is surrounded by walls lined with books—most of which he said he hasn’t read.

Johnson, who holds two degrees in engineering and an MBA, launched the book club website in the wake of juggernauts like Barnesandnoble.com and Amazon.com. But unlike those mega book websites, aalbc.com draws a particular type of reader, mostly educated women, Johnson said.

“They can [be] reach[ed] with laser-light precision, this audience,” said Johnson, who’s currently in the process of soliciting advertisers. Though holding down a comfortable day job with a global investment firm, Johnson still wants to do more.

“It’s lucrative, but I do it at this point because I have to," the webmaster explained, reflecting on his day gig. "One of the things they don’t teach you in majority [white] schools is to be entrepreneur. They teach you to go out and get a job," Johnson said.

The 44-year-old, who grew up in Harlem’s Johnson Houses, returned to the neighborhood years later and purchased an abandoned shell of a house blocks away from where he grew up. He’s renovated it into the chic brownstone where he currently resides with his wife and two daughters.

For a kid growing up in the projects, Johnson’s success, compared with that of his peers, is impressive, but not impossible.

“We see struggle as a bad thing,” said Johnson. But the graduate of Brooklyn Technical High School, who went on to pursue electrical engineering at Syracuse University then complete several masters degrees from Polytechnic University and New York University’s Stern School of Business, sees struggle as survival.

“If we’re not struggling, we’re not going to get to another level or state,” said Johnson.

Clearly, he’s looking to take AALBC.com to the next level. As he branches out, Johnson is encouraged by the growth he has seen in the field of Black literature. When the website began, the number of Black books available to the public was minimal. However with many authors self publishing and using the web as a marketing tool to sell their literature, the field has exploded, making it harder to catalogue all the blossoming Black writers and books on the website. 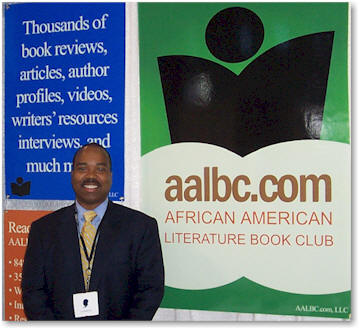 Some might say for Troy Johnson, founder of the African American Literature Book Club, that his new found love for literature came late in life. But for all of us long time bibliophiles and newcomers alike, the emergence of AALBC (https://aalbc.com) four years ago was right on time.

In the last few years AALBC.com has received a fair amount of media attention. The New York Times referred to AALBC.com as "the most successful online service that specializes in books for African Americans." And Black Issues Book Review called AALBC.com "a true smorgasbord for those who love African American Literature."

When I first spoke to Troy I thought that with degrees in engineering and business he would be an unlikely source for information about books. However as we sat talking in a cafe in the Park Slope section of Brooklyn late one a Saturday morning, I realized that he is actually the perfect person for the job.

Developing a website focusing on books was according to Troy "a pragmatic decision." Initially he simply wanted to sell African American books ala Amazon.com. “I picked books because they are more or less a commodity," he said. "People don’t care too much about where they buy them from. They just want the cheapest price.”

However in retrospect Troy found that books are tough to sell on the internet. So over time the focus of AALBC.com began to change. 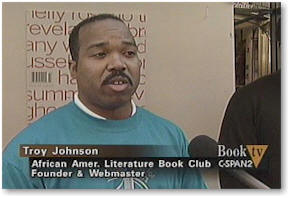 "As I worked on the website," Troy said. "It became clear that there was a more pressing need in this industry and that was to help authors increase their exposure and to increase the information about books they have coming out." Now the site sells books as an affiliate of Amazon.com & Barnesandnoble.com and directly AALBC.com has books that are autographed or as Troy says "have some other advantage over other books that are sold online." But the main purpose of the site is to promote the literature, not sell it.

The success of AALBC.com is indicative of two trends. One is the publishing industry’s discovery of a hungry African American book buying community and secondly, the ever evolving use of the internet for everything from socializing to shopping. At AALBC.com you can do both. And it takes a webmaster to make it all happen. That's where Troy's technical know how comes in handy. And his thirst for information about books is what spurs him on.

While Troy always read non-fiction and technical books, he now spends his leisure time devouring fiction. He readily admits that his love of literature and the "book" culture was developed not before but after he conceptualized the idea for the site and he describes himself as his "best customer."

"Many African Americans," Troy notes, "show the negative effects of being exposed, through the mass media, to a distorted perspective of themselves..."

"While I was exposed to a lot of books, there are many authors that I had never heard of," he said. "I didn’t know J. California Cooper until I started the site. Now if you go to the site, you can find an audio interview of her, a photograph, all the books she has in print, book excerpts, the whole nine. And I actually like her work and I learned about her through the site."

On his reading lists now are J. California Cooper’s The Wake of the Wind, John A. William’s Captain Blackman, and Daddy Big Bucks by Robert Waite.

Troy also says that working with authors is another outgrowth of AALBC.com that he truly enjoys. Almost as much as the books themselves, Troy says he admires the writers and what motivates many of them, which is more than financial gain. "They do it because it's important and they're helping to define a culture."

AALBC.com is a labor of love for Troy, and when talking about love, of course, there’s always a down side. With Troy it’s time. Not only does he maintain one of the hottest sites on the web, he also has a “real” job, a wife and two young daughters. How does he do it all?

Balance and sacrifice. During the day Troy works as a consultant for a financial services firm. In the evening he spends time with his family. The website comes after all of that. A few years ago when he was just getting the site started he averaged about three hours of sleep per night. The day we talked there were a few book events that he had to miss because he was going to spend time with his daughters.

Troy has plans for AALBC.com that include creating an exhaustive list of authors and their work as well as teaming up with other websites for specific projects.

"Many African Americans," Troy notes, "show the negative effects of being exposed, through the mass media, to a distorted perspective of themselves; a perspective which would have us believe African-Americans are predisposed to criminal activity, unable to form a cohesive family, have an aversion to education, and can only excel in sports or entertainment. A broad range of African American literature can help counter the effects of negative stereotypes on our community," he said

The question still remains, why does a man with an MBA and an entrepreneurial spirit continue to work with books when he could easily sell widgets and make a ton of money?

"I simply want to promote one of the most powerful and positive elements of African "culture"our literature," he said.

Feature interview with Troy Johnson by the Book Lover’s Haven

All about the AALBC.com