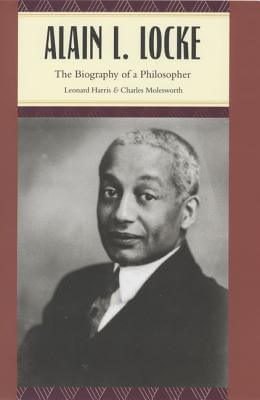 Alain L. Locke: The Biography Of A Philosopher
by Leonard Harris and Charles Molesworth

Hardcover Description:
Alain L. Locke (1886-1954), in his famous 1925 anthology TheNew Negro, declared that “the pulse of the Negro world has begun to beat in Harlem.” Often called the father of the Harlem Renaissance, Locke had his finger directly on that pulse, promoting, influencing, and sparring with such figures as Langston Hughes, Zora Neale Hurston, Jacob Lawrence, Richmond Barth , William Grant Still, Booker T. Washington, W. E. B. Du Bois, Ralph Bunche, and John Dewey. The long-awaited first biography of this extraordinarily gifted philosopher and writer, Alain L. Locke narrates the untold story of his profound impact on twentieth-century America’s cultural and intellectual life. Leonard Harris and Charles Molesworth trace this story through Locke’s Philadelphia upbringing, his undergraduate years at Harvard—where William James helped spark his influential engagement with pragmatism—and his tenure as the first African American Rhodes Scholar. The heart of their narrative illuminates Locke’s heady years in 1920s New York City and his forty-year career at Howard University, where he helped spearhead the adult education movement of the 1930s and wrote on topics ranging from the philosophy of value to the theory of democracy. Harris and Molesworth show that throughout this illustrious career—despite a formal manner that many observers interpreted as elitist or distant—Locke remained a warm and effective teacher and mentor, as well as a fierce champion of literature and art as means of breaking down barriers between communities. The multifaceted portrait that emerges from this engaging account effectively reclaims Locke’s rightful place in the pantheon of America’s most important minds.

More books like Alain L. Locke: The Biography Of A Philosopher may be found by selecting the categories below: