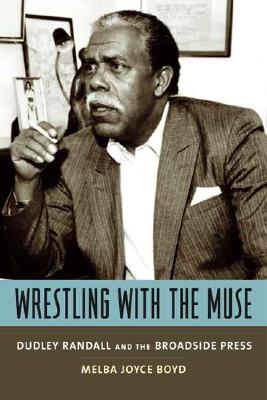 Wrestling with the Muse: Dudley Randall and the Broadside Press
by Melba Joyce Boyd

Book Description:
And as I groped in darkness

and felt the pain of millions,

I saw dawn upon them like the sun a vision.

?Dudley Randall, from "Roses and Revolutions"

In 1963, the African American poet Dudley Randall (1914 2000) wrote "The Ballad of Birmingham" in response to the bombing of a church in Alabama that killed four young black girls, and "Dressed All in Pink," about the assassination of President Kennedy. When both were set to music by folk singer Jerry Moore in 1965, Randall published them as broadsides. Thus was born the Broadside Press, whose popular chapbooks opened the canon of American literature to the works of African American writers.

Dudley Randall, one of the great success stories of American small-press history, was also poet laureate of Detroit, a civil-rights activist, and a force in the Black Arts Movement. Melba Joyce Boyd was an editor at Broadside, was Randall’s friend and colleague for twenty-eight years, and became his authorized biographer. Her book is an account of the interconnections between urban and labor politics in Detroit and the broader struggles of black America before and during the Civil Rights era. But also, through Randall’s poetry and sixteen years of interviews, the narrative is a multipart dialogue between poets, Randall, the author, and the history of American letters itself, and it affords unique insights into the life and work of this crucial figure.

More books like Wrestling with the Muse: Dudley Randall and the Broadside Press may be found by selecting the categories below:

Tell us what do you think about Wrestling with the Muse: Dudley Randall and the Broadside Press.