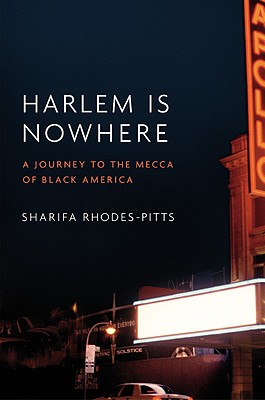 Harlem Is Nowhere: A Journey To The Mecca Of Black America
by Sharifa Rhodes-Pitts

“Most everything I write here is true and happened on or around Lenox Avenue. This is where I live now; if you stand at its center, the crossing at 125th Street, and look north and then south, you’ll see it come to a dead stop at both ends. It begins at the top of the park, where you can see the Harlem Meer, where I saw fireflies in summer and where each winter, I am told, teenagers drown trying to walk across the half-frozen ice. When I first moved here, to 120th Street, I was happy to be close to this secret, manmade lake, with its Dutch name, Haarlem Meer, the Lake of Harlem. Lenox Avenue begins there at 110th Street and ends up at 149th Street or so; I have never been to the very end of it. At the end a bridge goes over the Harlem River and then suddenly it is the Bronx. The Harlem River is not a real river, just as the Harlem Meer is not a sea or even a real lake, and Lenox Avenue is technically Sixth Avenue. Downtown it is called Avenue of the Americas before it runs into the south end of the park, and up town it is called Malcolm X Boulevard, but only by the kind of person who insists on calling Bombay Mumbai or Calcutta Kolkata. They would also feel the need to call Eighth Avenue, Frederick Douglass Boulevard and Seventh Avenue, Adam Clayton Powell, Jr., Boulevard. One Hundred Twenty-Fifth Street is also called Martin Luther King, Jr. Boulevard, but I’ve never heard anyone insist upon it. I don’t call any of these by their second names. The point is that Lenox Avenue doesn’t go anywhere, and yet it is thought to be the most important thoroughfare of the most important place for black people in America, if not the world.”Sharifa Rhodes-Pitts

"No geographic or racial qualification guarantees a writer her subject….Only interest, knowledge, and love will do that—all of which this book displays in abundance." (Zadie Smith, Harper’s)

A finalist for the 2011 National Book Critics Circle Award in Autobiography, and a New York Times Notable Book of the Year.

For a century Harlem has been celebrated as the capital of black America, a thriving center of cultural achievement and political action. At a crucial moment in Harlem’s history, as gentrification encroaches, Sharifa Rhodes-Pitts untangles the myth and meaning of Harlem’s legacy. Examining the epic Harlem of official history and the personal Harlem that begins at her front door, Rhodes-Pitts introduces us to a wide variety of characters, past and present. At the heart of their stories, and her own, is the hope carried over many generations, hope that Harlem would be the ground from which blacks fully entered America’s democracy.

Rhodes-Pitts is a brilliant new voice who, like other significant chroniclers of places-Joan Didion on California, or Jamaica Kincaid on Antigua-captures the very essence of her subject.

More books like Harlem Is Nowhere: A Journey To The Mecca Of Black America may be found by selecting the categories below: