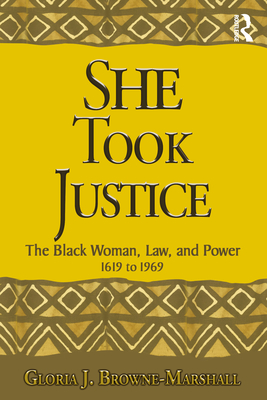 She Took Justice: The Black Woman, Law, and Power - 1619 to 1969 proves that The Black Woman liberated herself. Readers go on a journey from the invasion of Africa into the Colonial period and the Civil Rights Movement. The Black Woman reveals power, from Queen Nzingha to Shirley Chisholm.

In She Took Justice, we see centuries of courage in the face of racial prejudice and gender oppression. We gain insight into American history through The Black Woman’s fight against race laws, especially criminal injustice. She became an organizer, leader, activist, lawyer, and judge - a fighter in her own advancement. These engaging true stories show that, for most of American history, the law was an enemy to The Black Woman. Using perseverance, tenacity, intelligence, and faith, she turned the law into a weapon to combat discrimination, a prestigious occupation, and a platform from which she could lift others as she rose. This is a book for every reader.

Books similiar to She Took Justice: The Black Woman, Law, and Power - 1619 to 1969 may be found in the categories below: