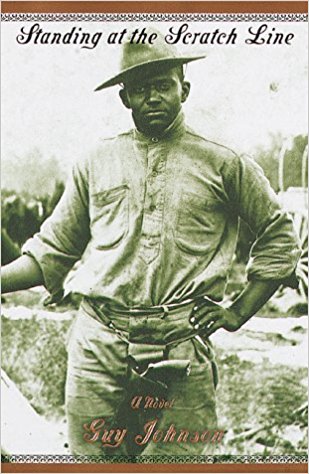 Standing at the Scratch Line
by Guy Johnson

Read an Excerpt from Standing at the Scratch Line

Raised in the steamy bayous of New Orleans in the early 1900s, LeRoi "King" Tremain, caught up in his family’s ongoing feud with the rival DuMont family, learns to fight. But when the teenage King mistakenly kills two white deputies during a botched raid on the DuMonts, the Tremains’ fear of reprisal forces King to flee Louisiana.

King thus embarks on an adventure that first takes him to France, where he fights in World War I as a member of the segregated 369th Battalion—in the bigoted army he finds himself locked in combat with American soldiers as well as with Germans. When he returns to America, he battles the Mob in Jazz Age Harlem, the KKK in Louisiana, and crooked politicians trying to destroy a black township in Oklahoma.

King Tremain is driven by two principal forces: He wants to be treated with respect, and he wants to create a family dynasty much like the one he left behind in Louisiana. This is a stunning debut by novelist Guy Johnson that provides a true depiction of the lives of African-Americans in the early decades of the twentieth century.

Standing at the Scratch Line was selected as AALBC.com on-line book club’s reading selection for October 1999.

Synopsis
In this hard hitting and action-filled novel, newcomer Guy Johnson (the son of Maya Angelou) introduces LeRoi Boudreaux Tremain, one of the most complex and engaging African-American characters in fiction. From the forests of France in WWI to the streets of New York City to a black township in Oklahoma, "King" Tremain is the angel of vengeance wherever he sees injustice inflicted on his people, friends or family.

Reviews and Commentary
After murdering two white lawmen, LeRoi Tremain is on the run — straight into the army and the Great War, where he proves himself an able killer. The result is "a brief history of 20th-century black America in the guise of a testosterone-fueled adventure yarn in this fast-paced, intelligent, and extremely violent first novel." The author comes by his talents naturally; he’s the son of Maya Angelou.

Books similiar to Standing at the Scratch Line may be found in the categories below: