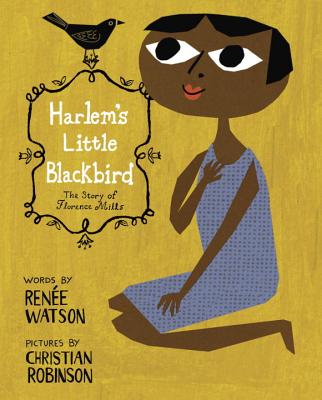 Book Description:
Zora and Langston. Billie and Bessie. Eubie and Duke. If the Harlem Renaissance had a court, they were its kings and queens. But there were other, lesser known individuals whose contributions were just as impactful, such as Florence Mills. Born to parents who were former-slaves Florence knew early on that she loved to sing. And that people really responded to her sweet, bird-like voice. Her dancing and singing catapulted her all the way to the stages of 1920s Broadway where she inspired songs and even entire plays! Yet with all this success, she knew firsthand how bigotry shaped her world. And when she was offered the role of a lifetime from Ziegfeld himself, she chose to support all-black musicals instead.

Fans of When Marian Sang and Ella Fitzgerald: The Tale of a Vocal Virtuosa will jump at the chance to discover another talented performer whose voice transcended and transformed the circumstances society placed on her.

More books like Harlem’s Little Blackbird may be found by selecting the categories below: