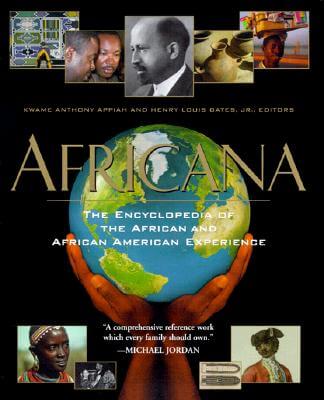 Hardcover Description:
Inspired by the dream of the late African American scholar W.E.B. Du Bois and assisted by an eminent advisory board, Harvard scholars Henry Louis Gates, Jr., and Kwame Anthony Appiah have created the first scholarly encyclopedia to take as its scope the entire history of Africa and the African Diaspora.Beautifully designed and richly illustrated with over a thousand images - maps, tables, charts, photographs, hundreds of them in full color - this single-volume reference includes more than three thousand articles and over two million words. The interplay between text and illustration conveys the richness and sweep of the African and African American experience as no other publication before it. Certain to prove invaluable to anyone interested in black history and the influence of African culture on the world today, Africana is a unique testament to the remarkable legacy of a great and varied people.With entries ranging from ”affirmative action” to ”zydeco,” from each of the most prominent ethnic groups in Africa to each member of the Congressional Black Caucus, Africana brings the entire black world into sharp focus. Every concise, informative article is referenced to others with the aim of guiding the reader through such wide-ranging topics as the history of slavery; the civil rights movement; African-American literature, music, and art; ancient African civilizations; and the black experience in countries such as France, India, and Russia.More than a book for library reference, Africana will give hours of reading pleasure through its longer, interpretive essays by such notable writers as Stanley Crouch, Gerald Early, Randall Kennedy, and Cornel West. These specially commissioned essays give the reader an engaging chronicle of the religion, arts, and cultural life of Africans and of black people in the Old World and the New.

More books like Africana may be found by selecting the categories below: