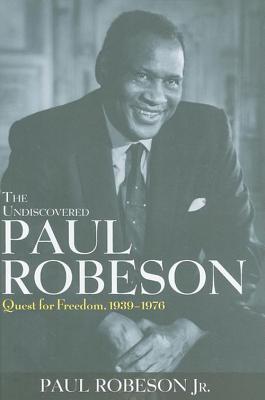 Hardcover Description:
The eagerly awaited second volume of Paul Robeson Jr.’s acclaimed biography of his father, the legendary singer, actor, and social activist.The greatest scholar-athlete-performing artist in U.S. history, Paul Robeson was one of the most compelling figures of the twentieth century. In this final volume of his groundbreaking biography, Paul Robeson Jr. tells the untold, inside story of his father’s life from World War II until his death, including his fight against racism and injustice and his courageous defiance of persecution by government agencies.Breaks new ground, using unpublished photographs and source materials from private diaries, letters, and government documentsOffers unprecedented insight into how Robeson bridged the contradictions of his personal and public lifePraised as ""an accomplished and moving memoir"" (Boston Globe, on Vol. 1) and ""an important, well-wrought addition to African-American, Cold War and theater scholarship"" (Publishers Weekly)Revealing a multifaceted figure who moved among major roles as a performer, political activist, husband, and father, The Undiscovered Paul Robeson traces the dramatic arc of one of the world’s most distinguished performing artists and passionate leaders in the fight for universal human rights.

More books like The Undiscovered Paul Robeson: Quest for Freedom, 1939 - 1976 may be found by selecting the categories below: