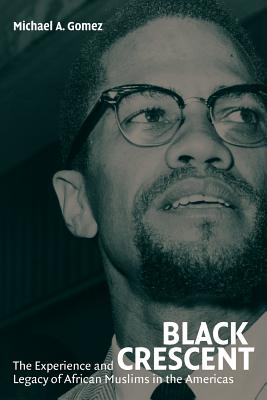 Black Crescent: The Experience and Legacy of African Muslims in the Americas
by Michael A. Gomez

Book Description:
Beginning with Latin America in the fifteenth century, this book comprises a social history of the experiences of African Muslims and their descendants throughout the Americas, including the Caribbean. The years under slavery are examined, as well as the post-slavery period. The study also analyzes Muslim revolts in Brazil—especially in 1835. The second part of the book traces the emergence of Islam among U.S. African descendants in the twentieth century, featuring chapters on Noble Drew Ali, Elijah Muhammad, and Malcolm X to explain how orthodoxy arose from varied unorthodox roots. Currently Professor of History and Middle Eastern Studies at NYU, Michael Gomez has research interests that include Islam in West Africa, the African diaspora and African culture in North America. He has been involved with the launching of a new academic organization, the Association for the Study of the Worldwide African Diaspora (ASWAD), and has published widely in the field.

More books like Black Crescent: The Experience and Legacy of African Muslims in the Americas may be found by selecting the categories below:

Tell us what do you think about Black Crescent: The Experience and Legacy of African Muslims in the Americas.