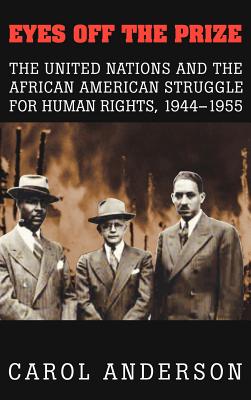 Eyes off the Prize: The United Nations and the African American Struggle for Human Rights, 1944-1955
by Carol Anderson

Book Description:
As World War II drew to a close and the world awakened to the horrors wrought by white supremacists in Nazi Germany, the NAACP and African-American leaders sensed an opportunity to launch an offensive against the conditions of segregation and inequality in the United States. The "prize" they sought was not civil rights, but human rights. Only the human rights lexicon, shaped by the Holocaust and articulated by the United Nations, contained the language and the moral power to address not only the political and legal inequality but also the education, health care, housing, and employment needs that haunted the black community. The NAACP understood this and wielded its influence and resources to take its human rights agenda before the United Nations. But the onset of the Cold War and rising anti-communism allowed powerful southerners to cast those rights as Soviet-inspired and a threat to the American "ways of life." Enemies and friends excoriated the movement, and the NAACP retreated to a narrow civil rights agenda that was easier to maintain politically. Thus the Civil Rights Movement was launched with neither the language nor the mission it needed to truly achieve black equality. Carol Anderson is the recipient of major grants from the Ford Foundation and the American Council of Learned Societies, and numerous awards for excellence in teaching. Her scholarly interests are 20th century American, African-American, and diplomatic history, and the impact of the Cold War and U.S. foreign policy on the struggle for black equality in particular. Her publications include "From Hope to Disillusion published in Diplomatic History and reprinted in The African-American Voice in U.S. Foreign Policy.

More books like Eyes off the Prize: The United Nations and the African American Struggle for Human Rights, 1944-1955 may be found by selecting the categories below: