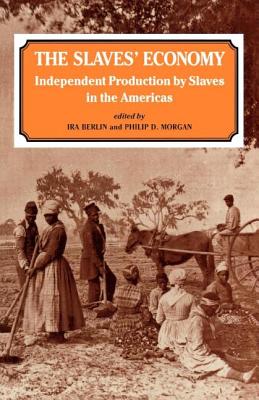 The Slaves’ Economy: Independent Production by Slaves in the Americas
by Ira Berlin

Paperback Description:
Slaves worked. When, where, and especially how, they worked determined the course of their lives and the shape of their culture. Slaves, naturally, served their owners for the most part, growing the great staples that stoked the international economy; but they also worked for themselves. They took control of a large part of their lives by producing food, tending cash crops, raising livestock, manufacturing finished goods, marketing their own products, consuming and saving the proceeds, and bequeathing property to their descendants. In many ways the slaves’ independent economic endeavours offered a foundation for their domestic and community life, shaping the social structure of slave society and providing a material basis for their distinctive culture. Moreover, the character of the slaves’ economy and the modest economic success achieved by black men and women during slavery influenced the hopes and aspirations they carried into freedom, giving direction to the post-emancipation struggle for equality. The legacy of slavery cannot be understood without a full appreciation of the economic basis of the world the slaves made for themselves.

More books like The Slaves’ Economy: Independent Production by Slaves in the Americas may be found by selecting the categories below: