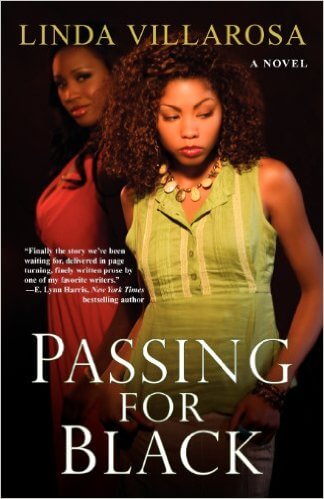 Passing For Black
by Linda Villarosa

Book Description:
Being black, the right kind of black, was difficult. It was like being in a cult—a secret society with rules as fluid as waves. . .

In the six years that Angela Wright has been with her fianc Keith Redfield, her life has settled neatly into place. Keith, a professor of African-American history, has helped her become comfortable in her own skin. And Angela’s career at D sire magazine is thriving. She’s got nothing to worry about—or so she thinks. . .

Angela’s best friend Mae is always there to ground her, whether they’re joking about the importance of good hair or gossiping about their rival Tatiana Braithwaite—a milk chocolate Barbie with beauty, breeding, and an irritating knack for perfection. Mae reminds Angela how lucky she is to have found a successful, single brother. But when a chance meeting leaves Angela consumed with desire for an intriguing stranger, she impulsively decides to follow wherever it may lead—from outrageous underground sex parties to intimate encounters that are both torrid and tender.

Now everything Angela has come to believe about sex, love, identity, and race is called into question as this explosive new passion blows her world wide open. . .

More books like Passing For Black may be found by selecting the categories below: