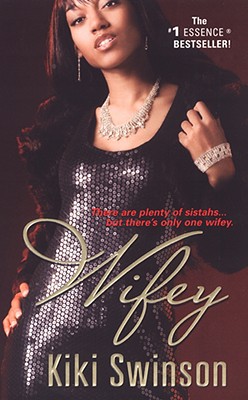 Mass Market Paperback Description:
Essence bestselling author KiKi Swinson offers up a scandalous street lit tale—and shows that no one else stands a chance when wifey runs the hustle. From the looks of things, Kira’s got it all. She owns a profitable hair salon and is livin’ the life in her six-hundred-thousand-dollar house with her huge diamond ring, designer clothes, and powerful husband. Kira’s man Ricky buys her whatever she wants, but he’s still a hustler through and through. A feared and respected drug lord, Ricky’s got no shortage of baby mama drama and women on the side. He may think he’s playing Kira, but Kira knows that only wifey has the pass codes to the bank account and the combination to the safe. While Kira runs the game well—that’s how she became wifey in the first place—she doesn’t always like it. And she’s about done with Ricky’s playah ways. So when one of his runners is busted and the Feds start sniffing around, Kira sees her way out. But nothing on the streets is easy, and Kira just might be in too deep. Life, money, love, and everything she’s ever worked for is on the line. Will Kira say goodbye to being wifey. . .or learn to play the game even better than before?

More books like Wifey may be found by selecting the categories below: