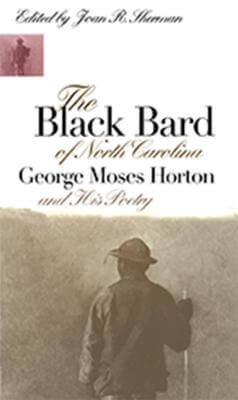 For his humanistic religious verse, his poignant and deeply personal antislavery poems, and, above all, his lifelong enthusiasm for liberty, nature, and the art of poetry, George Moses Horton merits a place of distinction among nineteenth-century African American poets. Enslaved from birth until the close of the Civil War, the self-taught Horton was the first American slave to protest his bondage in published verse and the first black man to publish a book in the South. As a man and as a poet, his achievements were extraordinary.

In this volume, Joan Sherman collects sixty-two of Horton’s poems. Her comprehensive introduction—combining biography, history, cultural commentary, and critical insight—presents a compelling and detailed picture of this remarkable man’s life and art.

George Moses Horton (ca. 1797-1883) was born in Northampton County, North Carolina. A slave for sixty-eight years, Horton spent much of his life on a farm near Chapel Hill, and in time he fostered a deep connection with the University of North Carolina at Chapel Hill. The author of three books of poetry, Horton was inducted into the North Carolina Literary Hall of Fame in May of 1996.

Inlcudes 62 of Horton Poems from his three books of Poetry

For his humanistic religious verse, his poignant and deeply personal antislavery poems, his folk verse, and, above all, his lifelong enthusiasm for liberty, nature, and the art of poetry, George Moses Horton merits a place of distinction among nineteenth-century African American poets. Enslaved for sixty-eight years - from his birth until the close of the Civil War - he was the first American slave to protest his bondage in published verse, the first black man to publish a book in the South, and the only slave to earn a significant income through the sale of his poems. As a man and as a poet, Horton's achievements were extraordinary. In this volume, Joan Sherman collects sixty-two of Horton's poems. Her comprehensive introduction - which combines biography, history, cultural commentary, and critical insight - presents a compelling and detailed picture of this remarkable man's life and art. Covering a wide range of poetical subjects in varied verse forms, this collection is an eloquent testament to Horton's unique voice.

For his humanistic religious verse, his poignant and deeply personal antislavery poems, and, above all, his lifelong enthusiasm for liberty, nature, and the art of poetry, George Moses Horton merits a place of distinction among nineteenth-century African American poets. Enslaved from birth until the close of the Civil War, the self-taught Horton was the first American slave to protest his bondage in published verse and the first black man to publish a book in the South. As a man and as a poet, his achievements were extraordinary.

In this volume, Joan Sherman collects sixty-two of Horton's poems. Her comprehensive introduction--combining biography, history, cultural commentary, and critical insight--presents a compelling and detailed picture of this remarkable man's life and art. THE POETICAL WORKS of GEORGE M. HORTON, The Colored Bard of North-Carolina, to which is prefixed The Life Of The Author, Written by Himself.

Excerpt from The Poetical Works

From the importunate request of a few individuals, I assume the difficult task of writing a concise history of my life. But to open a scene of all the past occurrences of my life I shall not undertake, since I should fail by more than two-thirds in the matter. But if you will condescend to read it, I will endeavor to give a slight specimen entirely clear of exaggeration. A tedious and prolix detail in the matter may not be of any expected, since there is necessarily so much particularity required in a biographical narrative.

I was born in Northampton county, N C., near the line of Virginia, and within four miles of the Roanoke River; the property of William Horton, senior, who also owned my mother, and the whole stock of her children, which were five before me, all girls, but not of one father. I am the oldest child that my mother had by her second husband, and she had four younger than myself, one boy and three girls. But to account for my age is beyond the reach of my power. I was early fond of music, with an extraordinary appetite for singing lively times, for which I was a little remarkable. In the course of a few years after my birth, from the sterility of his land, my old master assumed the notion to move into Chatham, a more fertile and fresh part of country recently settled, and whose waters were far more healthy and agreeable. I here become a cow-boy, which I followed for perhaps ten years in succession, or more. In the course of this disagreeable occupation, I became fond of hearing people read; but being nothing but a poor cow-boy, I had but little or no thought of ever being able to read or spell one word or sentence in any book whatever. My mother discovered my anxiety for books, and strove to encourage my plan; but she, having left her husband behind, was so hard run to make a little shift for herself, that she could give me no assistance in that case. At length I took resolution to learn the alphabet at all events; and lighting by chance at times with some opportunities of being in the presence of school children, I learnt the letters by heart; and fortunately afterwards got hold of some old parts of spelling books abounding with these elements, which I learnt with but little difficulty. And by this time, my brother was deeply excited by the assiduity which he discovered in me, to learn himself; and some of his partial friends strove to put him before me, and I in a stump now, and a sorry instrument to work with at that. But still my brother never could keep time with me. He was indeed an ostentatious youth, and of a far more attractive person than myself, more forward in manly show and early became fond of popularity to an astonishing degree for one of his age and capacity. He strove hard on the wing of ambition to soar above me, and could write a respectable fist before I could form the first letter with a pen, or barely knew the use of a goose-quill. And I must say that he was quite a remarkable youth, as studious as a judge, but much too full of vain lounging among the fair sex.

But to return to the earlier spring of my progress. Though blundering, I became a far better reader than he; but we were indeed both remarkable for boys of color, and hard raising. On well nigh every Sabbath during the year, did I retire away in the summer season to some shady and lonely recess, when I could stammer over the dim and promiscuous syllables in my old black and tattered spelling book, sometimes a piece of one, and then of another; nor would I scarcely spare the time to return to my ordinary meals, being so truly engaged with my book. And by close application to my book at night, my visage became considerally emaciated by extreme perspiration, having no lucubratory aparatus, no candle, no lamp, nor even light-wood, being chiefly raised in oaky woods. Hence I had to sit sweating and smoking over my incompetent bark or brush light, almost exhausted by the heat of the fire, and almost suffocated with smoke; consequently from Monday morning I anticipated with joy the approach of the next Sabbath, that I might again retire to the pleasant umbrage of the woods, whither I was used to dwell or spend the most of the day with ceaseless investigation over my book. A number strove to dissuade me from my plan, and had the presumption to tell me that I was a vain fool to attempt learning to read with as little chance as I had. Playboys importunately insisted on my abandoning my foolish theory, and go with them on streams, desport, and sacrifice the day in athletic folly, or alibatic levity. Nevertheless did I persevere with an indefatigable resolution, at the risk of success. But ah! the oppositions with which I contended are too tedious to relate, but not too formidable to surmount; and I verily believe that those obstacles had an auspicious tendency to waft me, as on pacific gales, above the storms of envy and the calumniating scourge of emulation, from which literary imagination often sinks beneath its dignity, and instruction languishes at the shrine of vanity. I reached the threatening heights of literature, and braved in a manner the clouds of disgust which reared in thunders under my feet. This brings to mind the verse of an author on the adventurous seaman.

"The wandering sailor ploughs the main,
A competence in life to gain;
The threatening waves around him foam,
'Till flattering fancy wafts him home."

For the overthrow and downfal of my scheme had been repeatedly threatened. But with defiance I accomplished the arduous task of spelling (for thus it was with me,) having no facilitating assistance. From this I entered into reading lessons with triumph. I became very fond of reading parts of the New Testament, such as I could pick up as they lay about at random; but I soon became more fond of reading verses, Wesley's old hymns, and other peices of poetry from various authors. I became found of it to that degree, that whenever I chanced to light on a piece of paper, so common to be lying about, I would pick it up in order to examine it whether it was written in that curious style or not. If it was not, unless some remarkable prose, I threw it aside; and if it was, I as carefully preserved it as I would a piece of money. At length I began to wonder whether it was possible that I ever could be so fortunate as to compose in that manner. I fell to work in my head, and composed several undigested pieces, which I retained in my mind, for I knew nothing about writing with a pen, also without the least grammatical knowledge, a few lines of which I yet retain. I will give you the following specimen. On one very calm Sabbath morning, a while before the time of preaching, I undertook to compose a divine hymn, being under some serious impression of mind:

Rise up, my soul and let us go
Up to the gospel feast;
Gird on the garment white as snow,
To join and be a guest.
Dost thou not hear the trumpet call
For thee, my soul, for thee?
Not only thee, my soul, but all,
May rise and enter free.

More books like The Black Bard Of North Carolina: George Moses Horton And His Poetry may be found by selecting the categories below:

Tell us what do you think about The Black Bard Of North Carolina: George Moses Horton And His Poetry.