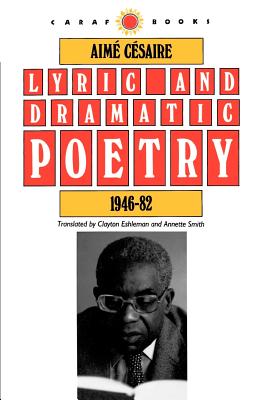 Paperback Description:
Aime Cesaire has been described by the Times Literary Supplement as likely to "figure alongside the Eliot-Pound-Yeats triumvirate that has dominated official poetic culture for more than fifty years." He was a cofounder and exponent of the concept of negritude and is a major spiritual, political, and literary figure.Cesaire has been read politically as a poet of revolutionary zeal since the 1960s. This collection, the only one in existence in any language to give a truly comprehensive retrospective of Cesaire’s poetic production, demonstrates the narrowness of earlier readings that grew out of the climate of Black Power influenced by the essays of Frantz Fanon, another Martinican, who was largely responsible for the ambient view of Csaire a generation ago. It is the first collection to translate And the Dogs Were Silent and i, laminaria…Lyric and Dramatic Poetry, 1946-82 goes beyond anything else in print (in French or in English) in that it locates the issues of Cesaire’s struggle with an emerging postmodern vision. It will place Cesaire in a strategic position in the current debate in the U.S. over emergent literature and will show him to be a major figure in the conflict between tradition and contemporary cultural identity.

More books like Lyric and Dramatic Poetry, 1946-82 (CARAF Books: Caribbean and African Literature translated from the French) may be found by selecting the categories below: