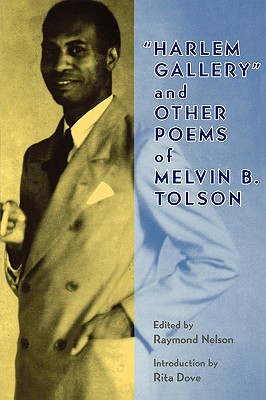 "Harlem Gallery" and Other Poems of Melvin B. Tolson
by Melvin Tolson

Paperback Description:
The poet Melvin B. Tolson (1898-1966) was once recognized as one of black America’s most important modernist voices. Playful, fluent, and intellectually sophisticated, his poems stirred up significant praise, and some lively criticism, during his lifetime but have been out of print for decades and essentially left out of the literary canon. With the publication of this first complete collection of his work, Tolson can finally be given his proper place in American poetry.This volume brings together Tolson’s three books of poetry—Rendezvous with America (1944), Libretto for the Republic of Liberia (1953) and Harlem Gallery (1965)—as well as fugitive poems after 1944. His work has at times been controversial because of his historical, intellectual subject matter, and his commitment to the priorities of art rather than the imperatives of politics. However a fresh reading of his challenging masterpiece, Harlem Gallery, a poem in 24 cantos, reveals an urgent meditation on the plight of the black artist in a white society and a concern with social justice that locates Tolson in the mainstream of African American writing. Such powerful themes, as well as his range of tone and mesmerizing imagery, have won Tolson a growing number of enthusiastic admirers, who place him alongside such legendary black poets as Langston Hughes, Gwendolyn Brooks, and Robert Hayden.While his peers Hughes and Countee Cullen were part of the Harlem Renaissance, Melvin B. Tolson was not identified with any particular movement, and his legacy in American literature has been elusive. This book, enhanced by a moving introduction by Rita Dove and useful notes by editor Raymond Nelson, provides the text for a renewed appreciation of one of the great talents in AfricanAmerican poetry.

More books like "Harlem Gallery" and Other Poems of Melvin B. Tolson may be found by selecting the categories below: