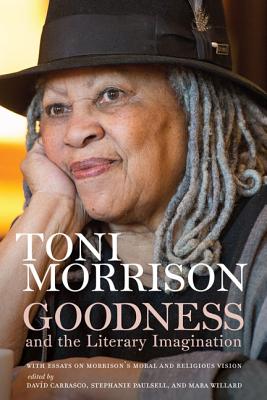 Goodness and the Literary Imagination: Harvard’s 95th Ingersoll Lecture with Essays on Morrison’s Moral and Religious Vision
by Toni Morrison

"The publication of this extraordinary book could not have arrived at a more propitious moment. At a time when the country as a whole seems tormented by the corrosive presence of a new kind of evil that is trying to banish any memory, much less evidence, of its opposite, Goodness and the Literary Imagination reminds readers of evil’s opposite, but in forms that Morrison’s fiction renders again strange. Its publication should be treated as a major event; its contribution to American literary and religious studies is absolutely assured."

——Giles Gunn, University of California, Santa Barbara, Emeritus, author of The Pragmatist Turn: Religion, the Enlightenment, and the Formation of American Literature

More books like Goodness and the Literary Imagination: Harvard’s 95th Ingersoll Lecture with Essays on Morrison’s Moral and Religious Vision may be found by selecting the categories below: