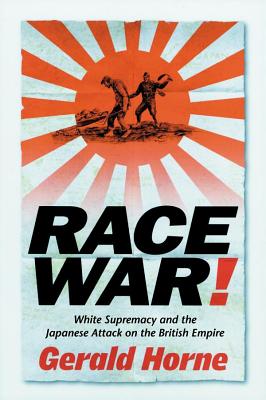 Race War!: White Supremacy and the Japanese Attack on the British Empire
by Gerald Horne

Book Description:
Japan’s lightning march across Asia during World War II was swift and brutal. Nation after nation fell to Japanese soldiers. How were the Japanese able to justify their occupation of so many Asian nations? And how did they find supporters in countries they subdued and exploited? Race War! delves into submerged and forgotten history to reveal how European racism and colonialism were deftly exploited by the Japanese to create allies among formerly colonized people of color. Through interviews and original archival research on five continents, Gerald Horne shows how race played a key—and hitherto ignored—;role in each phase of the war.During the conflict, the Japanese turned white racism on its head portraying the war as a defense against white domination in the Pacific. We learn about the reverse racial hierarchy practiced by the Japanese internment camps, in which whites were placed at the bottom of the totem pole, under the supervision of Chinese, Korean, and Indian guards—an embarrassing example of racial payback that was downplayed by the defeated Japanese and the humiliated Europeans and Euro-Americans. Focusing on the microcosmic example of Hong Kong but ranging from colonial India to New Zealand and the shores of the U.S., Gerald Horne radically retells the story of the war. From racist U.S. propaganda to Black Nationalist open support of Imperial Japan, information about the effect of race on U.S. and British policy is revealed for the first time. This revisionist account of the war draws connections between General Tojo, Malaysian freedom fighters, and Elijah Muhammed of the Nation of Islam and shows how white racism encouraged and enabled Japanese imperialism. In sum, Horne demonstrates that the retreat of white supremacy was not only driven by the impact of the Cold War and the energized militancy of Africans and African-Americans but by the impact of the Pacific War as well, as a chastened U.S. and U.K. moved vigorously after this conflict to remove the conditions that made Japan’s success possible.

More books like Race War!: White Supremacy and the Japanese Attack on the British Empire may be found by selecting the categories below: