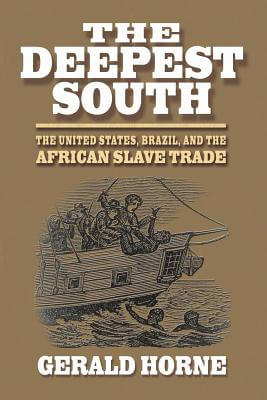 The Deepest South: The United States, Brazil, and the African Slave Trade
by Gerald Horne

Book Description:
During its heyday in the nineteenth century, the African slave trade was fueled by the close relationship of the United States and Brazil. The Deepest South tells the disturbing story of how U.S. nationals - before and after Emancipation — continued to actively participate in this odious commerce by creating diplomatic, social, and political ties with Brazil, which today has the largest population of African origin outside of Africa itself.Proslavery Americans began to accelerate their presence in Brazil in the 1830s, creating alliances there—sometimes friendly, often contentious—with Portuguese, Spanish, British, and other foreign slave traders to buy, sell, and transport African slaves, particularly from the eastern shores of that beleaguered continent. Spokesmen of the Slave South drew up ambitious plans to seize the Amazon and develop this region by deporting the enslaved African-Americans there to toil. When the South seceded from the Union, it received significant support from Brazil, which correctly assumed that a Confederate defeat would be a mortal blow to slavery south of the border. After the Civil War, many Confederates, with slaves in tow, sought refuge as well as the survival of their peculiar institution in Brazil.Based on extensive research from archives on five continents, Gerald Horne breaks startling new ground in the history of slavery, uncovering its global dimensions and the degrees to which its defenders went to maintain it.

More books like The Deepest South: The United States, Brazil, and the African Slave Trade may be found by selecting the categories below: