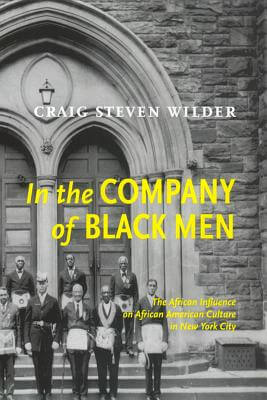 In The Company Of Black Men: The African Influence On African American Culture In New York City
by Craig Wilder

Hardcover Description:
From the subaltern assemblies of the enslaved in colonial New York City to the benevolent New York African Society of the early national era to the formation of the African Blood Brotherhood in twentieth century Harlem, voluntary associations have been a fixture of African-American communities. In the Company of Black Men examines New York City over three centuries to show that enslaved Africans provided the institutional foundation upon which African-American religious, political, and social culture could flourish. Arguing that the universality of the voluntary tradition in African-American communities has its basis in collectivism—a behavioral and rhetorical tendency to privilege the group over the individual—it explores the institutions that arose as enslaved Africans exploited the potential for group action and mass resistance. Craig Steven Wilder’s research is particularly exciting in its assertion that Africans entered the Americas equipped with intellectual traditions and sociological models that facilitated a communitarian response to oppression. Presenting a dramatic shift from previous work which has viewed African-American male associations as derivative and imitative of white male counterparts, In the Company of Black Men provides a ground-breaking template for investigating antebellum black institutions.

More books like In The Company Of Black Men: The African Influence On African American Culture In New York City may be found by selecting the categories below: